Brunner’s Tavern, located on Main Street in Buffalo/Amherst was one of the more requested places I try that I haven’t been to yet.  They’re not specifically known for wings (more on that below) but enough people have praised them to get me intrigued enough to give them a whirl.  The bar and atmosphere were certainly nice, but are the wings any good?

PROS: I’m a sucker for wings cooked on the grill and this is one of a small handful of places I’ve had that does it. The bartender/cook prepped em’ well, cooked em’ well and I could taste that nice charred flavor with each bite.  The medium were good and cajun medium even better.  The service was great, the vibe felt comfortable on a Monday night and I enjoyed everything about the physical experience of going there, including seeing Mike Peca walk in not five minutes after I did.

CONS: The cajun medium were sort of a dry rub, at least it felt that way to me and could’ve used more sauce. As a result I felt they lacked a bit of kick and while I won’t say they got dry weren’t particularly moist either.  The BBQ cajun were just alright if not borderline disappointing to be honest.  Lastly, and not uncommonly— the wings weren’t particularly big either.  I ate a single order and had room for at least a handful more, and that’s not just because I’m fat. 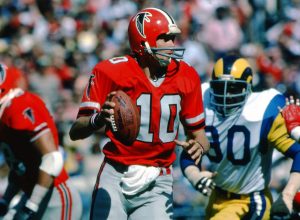 QB COMPARISON: Steve Bartkowski. Former Atlanta Falcons gunslinger was good enough to be considered near the upper tier quarterbacks in the NFL but never quite good enough to get to a Super Bowl, even after going 12-4 in 1980.

If BRUNNER’S TAVERN PLAYED A FULL NFL SEASON: 10-6. Very capable of the playoffs if just one or two things fall their way. I could see them getting out of the wild card round but the divisional round is definitely their ceiling.

OUTLOOK: These were better than good but not quite great wings. Brunner’s is worth coming to even if only there to eat but they’re not quite destination wings, meaning a spot I’d take a very long drive for. I do feel comfortable giving a recommendation based largely on the uniqueness of quality grilled wings.  As an aside, wings aren’t even close to being their signature food offering. The guy sitting directly next to me had a steak sandwich with fries that nearly had me salivating with jealously. I’ve heard their steak and fries is among the best you’ll get anywhere and visually I could see that. The wings may not be worth a drive from another town but I’d certainly bet the steak sandwich is.