Imperial Pizza is the gospel when it comes to pizza and wings for most people in South Buffalo.  Seriously, it’s nearly sacrilegious to speak negatively of it in that part of town and trust me, I’d know. I’m not a fan of their pizza. I’ve considered it quite bland and comparatively overpriced. I’ve gotten into heated exchanges with folk through the years for this stance.  Because of that, I never bothered to have their wings, as I assumed I’d feel the same.  Well, I was wrong—sort of.  Read on.

PROS: If you like you’re wings extremely saucy you’re in luck here. To call them saucy is a colossal understatement (more on that in a minute). For the traditional medium, this worked out great. They were tasty, very tasty in fact. Nice sized wing, cooked well with sauce I savored. I say it frequently and will do so again here—when getting both the traditional medium (or hot) as well as a promoted signature flavor, I’ll always put more weight on the traditional wing because it’s the one where the field is completely level for fair comparison. The medium wings were significantly better than just the typical pizza joint wing. 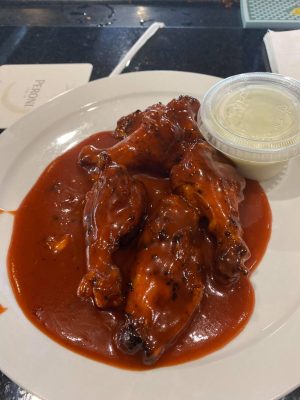 CONS: To be fair, I did ask for my wings saucy, but these were quite literally the sauciest wings I’ve ever had in my life, ever. My plate was essentially wing sauce soup. You could’ve had a full bucket of wings on the plate and there’d still be too much sauce. For the Char BBQ wings, this was a monumental detriment.  The sogginess absolutely killed any charred flavor they were supposed to have.  These might be great if the sauce ratio was even remotely passable but I wouldn’t know. Very disappointed in what I expected to be a signature wing.

RECORD IF IMPERIAL PIZZA PLAYED A FULL NFL SEASON: 10-7.  Loads of potential there, but they got to clean up a few mistakes.  Imperial Pizza’s certainly capable of having playoff team caliber wings.

OUTLOOK: Let me tell you how blown away I am with the remodeled look Imperial has.  I remember a time where my only experience with Imperial was delivery or pickup for house drinking gatherings.  They’ve transformed themselves into a really trendy spot in South Buffalo over the past few years.  The dining area is plenty big, the bar’s kickass with a ton of TVs and at least during the summer months, the outdoor patio is an awesome luxury.  They had an acoustic band going when I was there so live vibey music is a thing there too. Hell, even the bathrooms are clean and have a small TV near the sink area—having me feeling I was in a trendy downtown spot with that.

Even if you wanted to skip food and do nothing but drink, this has turned into a fantastic place to watch a game or hang out with people. 24-oz domestic beers for six bucks isn’t a bad deal and they also serve wine.  That said, this a wing review and the wings were a mixed bag for me. The medium were far better than expected and on par with upper tier places but the Char BBQ were lousy because of the sauce overabundance.  Not going to crush one cook’s decision of what’s considered saucy one that night but can’t just give it a pass either.

This place has the ability to become a wing spot and day/night out destination that people outside of just South Buffalo can brag about. Hopefully the sauce monsoon was a (very) rare oddity. I’ll find out soon enough because the traditional medium and overall vibe definitely has me eager to come back—so stay tuned for updates.