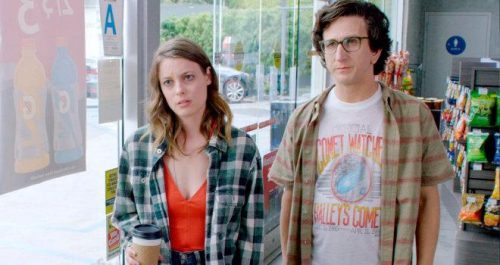 I’ve spent nearly the past two years of my existence not watching “Love” on Netflix; an original series created by Judd Apatow, Paul Rust and Lesley Arfin.  Before proceeding let me say this —- “Love” is as a romantic comedy with some bite, something you’d expect from an Apatow adaptation but make no mistake about it, if you tune in expecting two misguided souls who unexpectedly fall in love you can unconditionally root for, you’re barking up the wrong tree.  The lead characters are flawed if I’m being kind and flat-out unappealing if I’m not.

If you think I’m stating that as a criticism you’re wrong. I love “Love” (pun completely intended) more because of it. The world ain’t a perfect place and few characters still remotely likeable are less perfect than Gus and Mickey.

Season one premiered in February 2016 with 10 episodes and season two dropped last March with 12 more.  Prior to this past Friday I watched zero of those 22.  After flying through three seasons of “Lovesick” (more on that in a separate review) I decided to give this series a try. That was Friday afternoon.  Sunday morning I find myself writing about “Love”.  I can’t believe I waited this long.

Gus is an on-set tutor to a loud mouthed brat but occasionally affectionate child actress on a TV show called “Wichita.” He’s also a wannabe screenwriter, does things he doesn’t want to in order to please people and as often pointed out throughout the series, is nice to the point it verges on condescending.  Mickey’s a radio producer who also happens to be a recovering alcoholic, drug and sex addict.  In other words she’s a fuckin’ mess.

The severely damaged goods beauty finds an emotional connection that ultimately becomes physical with the geek. The poignant hammer consistently verging on slamming down on their relationship is largely what makes the show both charming and painful at the same time.

From the time they first hook up in an awkward romance during season one and through all of the second season, at least when they’re on the same page with each other the interaction is so engulfing that seemingly the rest of society hardly even registers in their world.

The problem, at least for Gus and Mickey is that bliss rarely lasts and there always seems to be something mortifying to their relationship around the bend whether it’s set off by an action, statement, singular word or even just a facial reaction. As a viewer we’re agonizingly mindful what’s one moment sweet and tender will unavoidably turn excruciating.

In short, season one’s primarily premised on an odd attraction and Mickey’s eventual realization that she’s really fucked up, needs help and needs to do it alone, something thrown out the window when Gus passionately kisses her.   The second season largely revolves around Mickey tussling between her affection and love for Gus balanced against her more considerable need to get herself better.

Through 22 episodes Mickey has come off far and away the more problematical character; a blend of beautiful helplessness and emotional openness when things are good, while transforming in a cold hearted bitch at warp speed when things aren’t.   However, Gus isn’t always the compassionate nerd having his spirit sucked away many feel he’s far too good for. Remember, it’s Gus that does something cold and callous to Mickey (late season one) long before Mickey does something equally regretful with a person from her past later in season two.   Truthfully speaking, Gus is exceedingly judgmental, contemptuous and an utter co-dependent (as he admits late in season two). He’s as much as fault for the asymmetrical state of their stammering romance as she is, maybe even more.

If Mickey and Gus are consistent with one thing, it’s knowing each other’s defects and how to unload them on each other during ruthless moments when their anger simmers over the top.

I don’t want to get away from myself, as my description of “Love” is starting to come off as a gloomy tale.  It’s often quite the opposite, as when they’re on they’re really on.  Despite the twists and turns “Love” is at its core a romantic comedy. Like many shows following a similar path, “Love” is a sequence of occurrences where Gus or Mickey sometimes do or say the wrong thing, more times than not with their heart in the right place, show remorse over what was said or done and semi-successfully transition back to life like not much happened.

Perhaps my favorite thing about “Love” is it never feels like a happy ending at the end of each episode or season is guaranteed, and at times turns my viewing encounters into straight up nail-biting.  I love the feeling that this relationship is occurring in the real world and not fantasy land.

Also, without giving away any significant spoilers I legitimately felt like the season two finale may end up like Sleeping with the Enemy, Fear or Fatal Attraction.  Get it together, dude.

CONCLUSION: The juggling of Mickey’s physical weaknesses (alcohol/drug/sex) versus Gus’s insecurity make for fascinating television. “Love” isn’t an Netflix original you lock in to because of its sophisticated storylines. The strength lies in the make-up of Gus and Mickey as well some of the series regulars.   While “Love” is the title I don’t feel like it’s the dominating theme. If the show were titled based on its most governing substance I’d call it “Get Your Ass Some Help.”

Not wanting to chance any spoilers I intentionally did zero reading about “Love” until I was caught up. I checked this morning and discovered a third season is coming to Netflix in March (yay!) and also that it’s going to be the final season (not cool, man).   At its worst “Love” is worth watching and at its best it’s one of the better television shows I’ve seen in at least a few years.  MORAN-ALYTICS GRADE: B+