On this unique episode of the Moran-Alytics Podcast presented by Pulse Cellular, Patrick Moran is joined by singer/songwriter and former finalist on Season 13 of The Voice, Addison Agen for a wide-ranging interview. 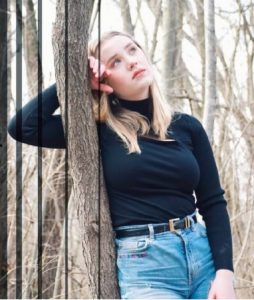 In 2017 at just 16 years old Addison auditioned for the voice and got chair turns from both Miley Cyrus and Adam Levine.  She originally went with Miley as her coach but after a loss in the battle rounds would up with Adam after both he and Jennifer Hudson used a steal on her. Choosing Adam paid off as she quickly became a show fan favorite and frontrunner, becoming the first contestant the entire season to hit the Top 10 on the iTunes charts with passionate vocals and girl-next-door personality that vaulted her all the way to the popular show’s finale, where she ultimately finished in second place.

They spend plenty of time talking about Addison’s journey on the show, including her taking listeners inside the long and arduous auditioning process that few fans know about.  Addison also discusses why she chose Miley initially but was thrilled to end up with Adam, dealing with nerves before hitting the stage, the relationships she developed on the show and more.

Every good story starts somewhere and Patrick gets Addison to open up about her upbringing in Fort Wayne, Indiana—the daughter of a music teacher and record store opener. Addison discusses her childhood as well as a teacher who had a great influence on her deciding to audition for The Voice.

They also spend a little time learning what Addison has been up to post-Voice, including new music she’s working on and opening up at some shows in Detroit for legendary iconic rock star Bob Segar before wrapping the interview with the podcast traditional Lightning Round, where we learn some Addison fun facts including her favorite non-music activity, place to visit and three musicians she’d love to have over for dinner.

After that Patrick’s joined by his buddy Joe (@buffalowins) for another installment of The Run-In With Joe.  After a little small talk on what Joe’s up to while visiting his hometown of Buffalo, the guys get down to business and discuss the severe overreaction of Josh Allen supporters on Twitter before, during and after the Buffalo Bills season opening victory at the New York Jets. As usual with Allen debate his performance varied, with supporters jumping on those critical of Allen’s play early on in the game despite him being at least partially responsible for four turnovers on Buffalo’s first six possessions. The guys agree that Allen turned things around in a fantastic second half and earned praise for the victory but it doesn’t put him above being criticized for a shaky opening two quarters.

Joe also has a strong take on if it’s at least plausible that injured Buffalo tight end Jason Croom is on the roster in part due to his relationship with the owners’ daughter before both offer a prediction on the Bills vs. New York Giants game this coming Sunday.

As usual, the segment concludes with Joe’s final take, called “The Finisher” and this time it’s regarding the term culture as it pertains to the Bills and football in general.