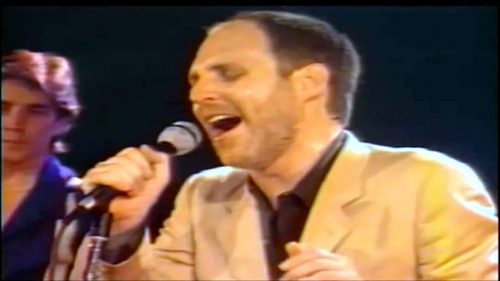 When I was 14-15 years old in the mid 80’s, most my friends idolized various athletes and celebrities.  Generally they ranged from Larry Bird, Wayne Gretzky, Don Mattingly, Michael Jackson and Eddie Murphy. Not me.  I desperately wanted to be Alex P. Keaton from Family Ties—I’m talking to the point that as a seventh and eighth grader I often wore dress shirts and ties to public elementary school in a neighborhood where that attired I’ll generously say wasn’t the norm.  Hell, I declared myself a Republican when literally having no idea what the political distinction even meant.

Never underestimate the power of television.

Billy Vera (and the Beaters) first recorded At This Moment in 1981. I’m sure I would’ve loved the song then—had I ever heard it. I didn’t know the song even existed back in those days and to be fair neither did most music enthusiasts. It wasn’t a pop hit by any stretch.

Fast forward a handful of years later, when I was hooked on the NBC Thursday night hit sitcom show Family Ties.  The Alex Keaton character, played by Michael J. Fox was someone I desperately was trying to emulate—whether it was his quick wit, condescending know-it-all attitude or dressing in company CEO attire despite still being a teenager in school.

I’ll never forget the time Alex met the first true love of his life, Ellen.  They were smitten with each other and the first time they slow danced it was to Vera’s At This Moment.  The episode titled “Alex Loves Ellen” was like nothing viewed on TV previous to that time — a complete crossover of sitcom TV and music, the very first of its kind.

The song would be featured on the show multiple times after that because of its increasing popularity, including their gut-wrenching breakup that literally had me in tears and still does today thinking about her leaving for Paris. Ugh.

Family Ties subject matter aside, At This Moment is a depressingly luminous work of music by Vera.

On a podcast, Vera described the process of the song’s origin.

“I was living still in New York, and I met a young college girl, about 20 years old,” he said.  “We started dating – she told me she had just broken up with her boyfriend, and she described what he went through when she gave him the bad news. And she was very descriptive.

So I went home and I was impressed by what he must have been feeling. I wrote the first two-thirds of the song based on my imagination of what this guy was feeling. And I couldn’t finish it, I just couldn’t figure out how it ended. And then about 9-10 months later, when she broke up with me, I had gotten very emotionally involved with her, and then I knew how the song ended. And that was the famous line that everybody remembers: ‘I’d subtract 20 years of my life.’ We stayed in touch for a long time. She was one of these sort of narcissistic girls that like the idea of somebody mooning over her for years, and I did.”

Thank God Family Ties put this song in my life. I can’t think of a ditty that makes me want emotionally torture myself more and oddly enough, I’m kinda thankful for it.

It’s my second-favorite despondent tune of the 80’s.  You’ll see who reigns supreme in that genre soon enough.

Chart Success:  When originally released in 1981 the song only maxed out at 79 on the charts, but thanks to the Family Ties exposure it would rise to number-one on the Billboard Hot 100 six years later. It remained number-one for two weeks before getting knocked off by Madonna’s Open Your Heart.  At This Moment remained on the charts for 21 weeks and finished 1987 ranked 20th on the year-end Billboard Hot 100.

Great Lyrics:  I mean, your love for someone needs to be unworldly if you’re willing to potentially sacrifice 20 years of your life to be with them.

“What do you think
I would give at this moment
If you’d stay, I’d subtract
Twenty years from my life
I’d fall down on my knees
I’d kiss the ground that you walk on
If I could just hold you again”

Fun Facts:  Alex and Ellen became far more than a TV love.  Fox and Tracy Pollan fell in love in real life and got married in 1988.   Prior to meeting and hooking up with Fox, Pollan had a five-year relationship with Kevin Bacon.  Pollan and Fox have been married for 29 years (a rarity in Hollywood) and have four children.  Fox has said in many interviews the couple can’t get on a dance floor without the DJ playing Vera’s song.