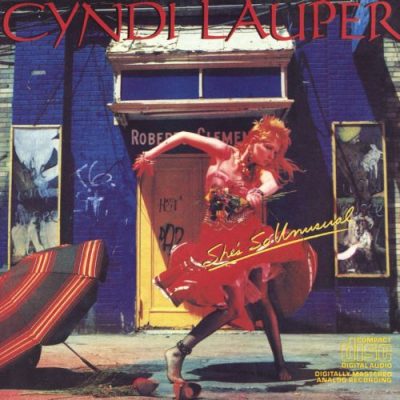 Notable Songs: “Girls Just Wanna Have Fun”, “Time After Time”, “She Bop”, “All Through the Night” “Money Changes Everything”

Why I Loved It: Cyndi Lauper is the Gwen Stefani of the 80’s  — only far, far better. Whether they were happy-go-lucky jams like “Girls Just Wanna Have Fun”, “She Bop” or “Money Changes Everything” of emotional ballads like “Time After Time” and “All Through the Night”, Lauper not only dominated the mid-80s with this debut album but really set the standard for female pop (with a touch of new wave) music, and no I didn’t forget about Madonna either.  Lauper may have been a little wacko, but she was the perfect kind of wacko.  It’s just the industry needed back then.

More importantly, her tunes on She’s So Unusual are so compelling and have stood the test of time more than three full decades later.

Commercial Success:  Lauper’s debut album was her career-best both critically and commercially. She’s So Unusual never reached number-on the Billboard Top 200, it peaked at four — but stayed on the top 40 charts for an incredible 65 weeks. It would finish 1984 ranked 11th on the year-end Billboard Top 200 and 29th in 1985.  Lauper also made history here, becoming the first female to have four top five Billboard Hot 100 singles on one album. “Time After Time” would become Lauper’s first Billboard Hot 100 number-one hit, spending two weeks on top. “Girls Just Wanna Have Fun” was her first single and peaked at two. “She Bop” rose as high as three on the charts while “All Through The Night” reached four.  “Money Changes Everything” was her fifth-charting single but stalled out at No. 27.  She’s So Unusual would go on to receive several Grammy nominations, including both Album and Record of the Year.  Neither won but Lauper did win the Grammy for Best New Artist.  The album to date has sold more than 12 million copies worldwide, including over six million in the United States.

Fun Facts: From Songfacts.com regarding “She Bop”, which in the interest of complete honesty I wasn’t completely sure of until doing the research for this countdown:  “This song is about masturbation: “They say that if I do it I’m going to go blind…,” “I can’t stop messin’ with the danger zone.” The video takes place in some kind of dystopian future where everyone conforms. It opens the “Burger Klone,” where smiling, lobotomized customers get their meals. Lauper finds herself a bad boy with a motorcylce and rides off in an animated landscape (a coy reference to the song’s meaning: when they stop a a gas station marked “self service”). By the end of the video, she has apparently gone blind.Lauper wanted kids to think this was about dancing. She was hoping they wouldn’t understand the real meaning until they got older. Lauper was an unlikely target for the Parents Music Resource Center (PMRC), but the group included “She Bop” on their 1985 list of the “Filthy 15” songs they found most objectionable. Since the PMRC was made up of the wives of lawmakers, they were able to force a senate hearing in their efforts to establish a rating system for music akin to what is used for movies. In the end, they got warning stickers placed on albums with explicit lyrics. These stickers generally helped sales of other “Filthy 15” members (Judas Priest, Prince and Twisted Sister among them), but an artist like Lauper was more likely to leave off a song that could get an album stickered, as it could hurt sales. A song like “She Bop” may not have made the cut once this system went in place.”