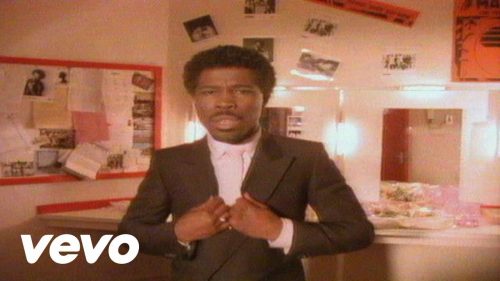 One must give Billy Ocean a lot of credit.  Back in the 80’s he (or perhaps Jive Records) was pretty savvy marketing dude.  In 1984 he recorded a song using several titles over different parts of the world, changing literally just one word for each.  It’s confirmed he released African Queen and European Queen.  Who knows, maybe there’s also an Indonesian Queen, Mediterranean Queen and Macedonia Queen floating around somewhere.

I really don’t care if he had 16 different versions of the same song. The only edition that matters is Caribbean Queen (No More Love On The Run). It’s genuinely one of my most preferred songs from the 1980s—- my favorite decade of music.

There’s many things about Caribbean Queen I’ve always enjoyed, but what I always loved most is the record doesn’t try to be anything more than what it is.  For me, it’s simply a delightful blend of pop and soul. I’ve written this a time or two throughout this countdown and it’s worth reiterating —not every track needs to carry a meaningful, thought-provoking memorandum for the masses to be a celebratory track.  Sometimes it’s cool to just take 3 minutes and 15 seconds from the burdens of life and have a foolishly good time with a song like this.

It’s such an infectiously fun and catchy tune, you can’t help but feel cozy each time it comes on.

Oh, and good luck not dancing along to Caribbean Queen—let me know how that works out for you.

Amazing single aside, I regularly overlook how insanely underrated Billy Ocean was. When fans take nostalgic trips down memory lane to the 80s we reminisce over Michael, Prince, Madonna, Whitney, Lionel, Bruce, Phil and others, but Billy Ocean is rarely mentioned.  Counting Caribbean Queen (No More Love On The Run ßI’m so sick of adding that), Ocean had seven Top 10 hits from the 80s: Get Outta My Dreams, Get Into My Car (peaked at No. 1), There’ll Be Sad Songs To Make You Cry (1), When The Going Gets Tough (2), Lover Boy (2), Suddenly (4) and Love Zone (10).

Billy Ocean was a winner, and Caribbean Queen was his greatest triumph.

Chart Success: Caribbean Queen (No More Love On The Run) rose to number-one on the Billboard Hot 100.  It stayed on top for two weeks before getting bumped by Wham’s Wake Me Up Before You Go-Go. It spent a total of 26 weeks on the chart and finished 1984 ranked 51st on the year-end Billboard Hot 100.

Great Lyrics: I wish I had the power to telepathically know a girl’s name and phone number simply by blinking my eye, but that shit has never worked for me.

Fun Fact: They say 1984 was arguably the greatest year ever for pop music. I’d love to meet a few of the schmucks who’d argue against it.  All seven of  Billboard’s top songs from 1984 appear in this countdown, including four in my top ten. In total 17 of the top 40 songs from 1984 have appeared (or will) on this countdown.  That’s 43% of my top 40 from one year!