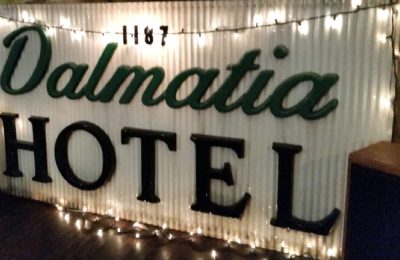 Hotel Dalmatia is located in Riverside and I hit up in the early afternoon during the week with reinforcements.  My wife, daughter, her boyfriend and my son joined me.  Because of my extensive company we tried five different flavors, though in keeping with my own rules I only counted the medium plus one signature (in this case Chiavetta Cajun) for this review. To call it an unexpected experience is an understatement.  Let’s dig in.

PROS: The wings were generously sized with enough crisp but not TOO crispy. More importantly the taste borderline blew me away. Like I said we ordered five flavors (they have around 60 or some crazy shit like that) and the traditional medium were really (really) good.   Taking it one step further, I’d put their Cajun Chiavettas against almost anyone’s specialty wing. Holy shit, they were they tasty.   Not counting towards my overall review we also had Garlic Parm, Chiavettas BBQ and Lemon Pepper Franks.  Of them, the BBQ were the best.  Bonus points for being reasonably priced and the people (more on that in a second) were nice.

CONS: This isn’t a con to everyone or even most but must be mentioned.  The location can be scary, especially if you’re not a city slicker. Let’s keep things real here—Riverside doesn’t have the best reputation and isn’t the safest part of WNY.  I could easily see people who aren’t “city smart” intimidated by this place, especially after dark.  Also, this is a place most go to drink first and eat second.  Although the bartender and patrons couldn’t have been nicer, I wouldn’t consider this a quintessential spot to bring the entire family for a sit down dinner.   Lastly, which doesn’t factor into my review I wasn’t a fan of the Lemon Pepper Franks—far too strong for my liking. 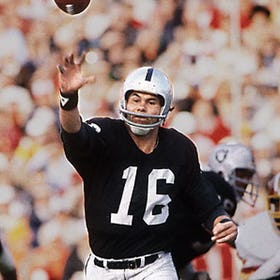 QB COMPARISON: Dalmatia is the Jim Plunkett of quarterbacks. When talking about the game’s greats you don’t think much of Plunkett if at all, but if a few things fell his way Plunkett proved to be a championship winning quarterback.   if you’re all about the wings you can wholeheartedly trust this place.

RECORD IF DALMATIA HOTEL  PLAYED A FULL NFL SEASON: 13-3 but worth nothing that they could really use a new stadium.

OUTLOOK: I want to be very clear about my cons, those are only for some wing-goers and not a general reflection on Dalmatia Hotel. I found the place and its clientele awesome. If you don’t mind Lynard Skynard potentially blaring on the jukebox while you mow down delicious wings you’re good to go. Props to Joe Yerdon from The Athletic for recommending this spot to me.  Can’t wait to have them again.