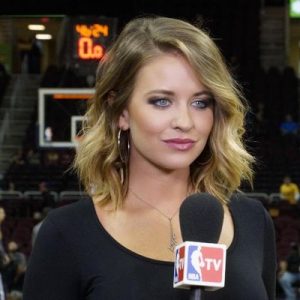 On this episode of the Moran-Alytics Podcast presented by 26 Shirts, Patrick Moran interviews one of the most popular NBA television personalities in the business, Kristen Ledlow from NBA TV and NBA on TNT on a variety of topics.

They discuss Kristen’s life and career, including being raised in Florida and turning to athletics early on because she was much taller than most girls her age.  Kristen became quite accomplished in sports, particularly basketball and volleyball and continued playing them at a high level all the way through college.

It was while at Southeastern University that Kristen really turned her focus towards what’s become a great broadcasting career. She discusses what got her into broadcasting and how college helped prepare her for opportunities in broadcasting that’s defined her professionally.

She also talks about how the chance to work alongside NBA legend Grant Hill for NBA Inside Stuff came about, some of her biggest sports media influences including Ernie Johnson and Doris Burke and plenty more before finishing with the traditional Mini-Lightning Round, filled with fun facts about Kristen including her first celebrity crush, go-to karaoke song, the game show she can (actually did) dominate and two people who would battle it out to be her lone Twitter follow.

After that Moran is joined by Jeff Boyd (@JeffBoyd716) from the 716 Sports Podcast for another installment of “The Big Boyd Theory.”

Today the guys are talking the surprisingly great starts from both the Buffalo Bills and Sabres.  The Bills are 4-1 and coming off their bye week as they get ready to host the hapless Miami Dolphins this Sunday.  They discuss some of the early season storylines and examine the remainder of the schedule to determine there’s excellent opportunity to make the playoffs for the second time in three years, regardless of whether or not the fast start was a fluke.

They also chat about the Sabres, who’ve outperformed expectations of nearly everyone through their first six games. While some stars lighting up the stat sheet isn’t surprising the steady and highly coach-praised play of an embattled fourth line certainly has been.

Patrick and Jeff also talk about whether the promising beginning to Buffalo’s respective seasons feels sustainable.