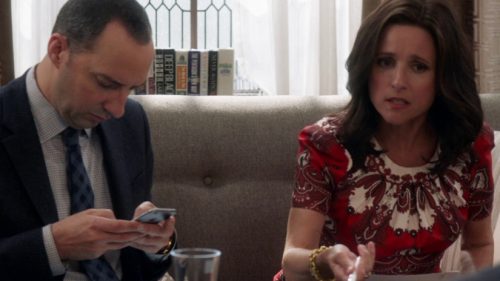 If citizens of the United States thought they’d seen the last of Selina Meyer in office, they have another thing coming—at least in her falsified mind.

Time-hopped one year ahead of this past season five finale that saw Meyer defeated by Laura Montez in the Presidential vote by the House of Representatives, Meyer proclaims (solely to her inner circle) her intent to run again for President, of which draws the wholehearted  support of—absolutely nobody.

More on that in a minute.   Season six begins with Selina interviewed on the CBS morning show by her former Deputy Director of Communications Dan Egan, who’s slanting for a permanent gig as co-host on the show.  Pressed (calculatedly) by Egan on some of Selina’s Presidential pardons before leaving office last year, she changes the narrative by declaring her “Meyer Fund for Adult Literacy (and also Aids) charitable foundation.  She also discloses a half-truth that she’s been working, feverishly on a memoir from her time as the first FPOTUS (of which she literally hasn’t written a sentence yet and received a mere miniscule in publishing advances compared to other former Presidents).

To the surprise of no one, Gary has remained loyal to Meyer while Richard is her official assistant.

As for the others:

Jonah Ryan got testicular cancer, beat it and despite being in remission secretly continues to shave his head because “people liked it, and he even got four and a half handies out of it.”

The aforementioned Dan, who wants the co-hosting gig until he finds out the main anchor has a reputation for destroying thriving careers.  Dan then intentionally attempts to sabotages his interview with Jonah, but after a string of masked insults that sees the congressmen walks off the set, CBS producer (played by Andre from “The League”) says it’s great TV and people love it.

Ben has a job working in the executive offices at Uber but a run of unbeknownst (to him) racially insensitive remarks sees him get fired.

“Bunch of dumb-ass millennials, too lazy to learn how to drive drunk” – Ben on Uber.

Amy’s living in Nevada and running the gubernatorial campaign for Buddy Calhoun, of whom she’s also engaged to and apparently has a fetish for getting off in bed to political pillow talk.

Mike, the former Director of Communications for Meyer is a stay-at-home dad to three children, including an adopted Chinese girlwho doesn’t acknowledge him as her dad.  He’s wanted for a job by Selina solely because he’s in possession of a diary he kept while she was President, but the terms are that he won’t get paid until her book is eventually (if ever) published.

Back to the action…

After calling a family meeting, Selina announces her intention to run, which sees her daughter (Catherine) burst into tears…and not in a reassuringly good way.   She thinks it’s a bad idea, as does her now-wife/entruster of her finances after Grandma left everything to her upon her passing last season (Marjorie), her sketchy former Vice President Andrew and even Gary, who says nothing but his face communicates that it’s a terrible idea.

At the conclusion of the premiere, Ben is able to knock some sense (tho probably ultimately not not) into Selina by letting her know she won’t have the party or donor support for any Presidential run and that he’s going to take a job with Kent.  Selina says she’s only talking hypotheticals (lies) and offers him a role on her charitable board for Adult Literacy (and Aids), one he accepts.

BEST QUOTE
“I didn’t think it was possible to look more like a giant cock, but I guess it’s true what they say—you are what you eat.” – Dan to Jonah

MoranAlytics Grade:  A solid 9 out of 10.  Julia Louis-Dreyfuss is not only back, but better than ever.  This is arguably the show’s best season premiere yet.