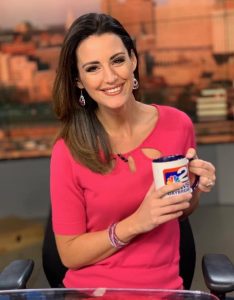 On this episode of the Moran-Alytics Podcast presented by Pulse Cellular, Patrick Moran chats with WGRZ-TV Buffalo “Daybreak” co-anchor and reporter Melissa Holmes on a wide variety of topics.

Born and raised in Western New York, Holmes talks about growing up in Amherst and being into musicals and dancing as a child, once dreaming of becoming a Rockette before coming to the realization she’d grow to be too tall.  From there she remembers the exact moment where she decided that she could see herself becoming a news journalist and hits on many of the steps that she took to get there.

They also talk about the unorthodox sleep (or lack thereof) schedule Holmes became accustomed to with being on the air so early as well as the favorite part of her job.  Melissa reveals the emotional connection that comes with getting to know some of the people she does stories on and how it can be difficult but also help put her own life into perspective.

Melissa also shares stories of how her and her husband, Buffalo News sports reporter Jay Skurski first met and  their son Elliott’s impressive golf swing before finishing with the traditional mini-lightning round, where we learn among other things her first celebrity crush, most re-watched movie, favorite city to visit, what TV game show she could dominate and much more.

You can follow Melissa on Twitter @2MelissaHolmes, be sure to check out some of her work at WGRZ.com and of course, tune into Channel 2 weekday mornings from 4:30-7:00am for Daybreak.

Immediately following that interview, Moran is joined by Jeff Boyd (@JeffBoyd716) for the debut of a new recurring segment called “The Big Boyd Theory.”  Jeff is one of the guys from the 716 Sports Podcast crew as well as a play by play announcer for several teams and will bring takes on several sports topics to the segment, particularly hockey.  Today Moran introduces Boyd to his audience and spend a few minutes getting to know him before gaging Boyd’s reaction to the Buffalo Sabres re-signing Jeff Skinner to a whopping nine-year, $81 million deal a couple of days ago.  We get Jeff’s personal perspective on if the Sabres did the right thing while examining how the deal is being perceived around the league.