Sports City Pizza Pub is a restaurant/bar on Niagara Street on the west side of Buffalo serving wings, pizza and craft beer that’s been around for a little over four years.  They probably have a more expanded menu but frankly, I don’t care and didn’t look.  Y’all already know what I’m about.   I’ll be honest with you good people as well—I’m a born and raised Buffalo west sider so I was really hoping to enjoy a positive experience there even more than usual.

I also need to point out that while I’d love to take credit for “discovering” this place, I can’t.  Sal Capaccio first put me on to this spot and Josh Reed recommended I hit it up recently as well.   That said, those are guys I respect but really don’t give a shit about their wing opinions—I’ll find that out for myself.  Did Sports City come through? Let’s find out. 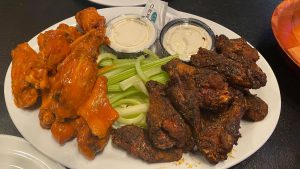 PROS: There’s several factors when I try to review and rank a wing spot, but the traditional medium/hot always has its seat at the head of the table. Signature flavors are fun but if you’re traditional wing sucks you’re not getting a good ranking from me.  For Sports City Pizza Pub, that’s a good thing because their medium was excellent. Cooked perfect without having to ask specifically for crispy they were plenty saucy as well without overdoing it.  Ironically, the medium was the lesser of the two types of wings I had, as the specialty flavor choice, Louisanna Cajun was even better. I could still taste the cajun lingering around my taste buds well after I was done. So we’re clear, there’s a difference just being salty and having legit cajun flavor and these were the latter. My son accompanied me for this trip and is significantly harder to please than I am.  He was blown away.  So, you got perfectly cooked wings loaded with flavor and very reasonably priced to match– $18.99 for a double is a pretty sweet deal.  These are right there on the cusp alongside the Mt. Rushmore of spots in Western New York.

CONS: If I had to be nitpicky (and always am) I’d say the only negative is the wings were kinda/sorta small.  Certainly not among the bigger, meatier wings I’ve had.  There were a good three or four of the 20 that verged on tiny, with no abnormally large ones to balance it out.  I’m fat so for me that’s probably a blessing in disguise but I’d like to see a single or double order come out a little meatier.  Also, and this is unfortunately common with city spots, parking on Niagara Street could be a problem when it’s busy—I got lucky and found a spot right in front but I wouldn’t count on that.

QB COMPARISON: Steve Young. Let me keep this short and sweet—you’ll have to look very (very) hard to find any holes in his game.  Ditto for Sports City.

RECORD IF SPORTSCITY PLAYED A FULL NFL SEASON: A comfortable 14-3 and that third loss comes because they sat many starters in Week 18.   PS: Even in this exercise it feels weird having 17 NFL games already.

OUTLOOK: I’m a knee jerk reactor so I wanted to take a solid few days to step back before writing anything.  Here’s the deal though, nothing’s changed for me.   When you take into account the wings, VERY GOOD pizza (I had a slice that was great but this isn’t a pizza review), reasonable prices, a bunch of craft beers (if that’s your thing), an incredibly charming and cozy interior, tons of room and TVs for watching games, cool stuff on the walls and just an overall vibe that made me feel great— I’ll go on a limb and suggest Sports City Pizza Pub may be the best all-around place for wings, pizza, drink and vibe in not just Buffalo, but all of Western New York that many of you don’t know about.  It’s certainly my new favorite spot.