You can have Christmas, New Year’s, family time and all that other shit. When I get a chance to come back to Buffalo for any reason, I’m here for the chicken wings.  Since moving to Florida roughly two and a half years ago, I realized how much I took having wings in Buffalo for granted, not to mention what a I creature of habit I was, frequenting the same two or three spots every time.

After quickly learning that nearly every place in Florida that serves chicken wings in Florida sucks, I decided each time I get back to Buffalo, whether for business or pleasure I’m going to hit up as many different wing joints as possible and subsequently power rank them. I fuckin’ love me some power ranking for literally everything. Lots of factors go into the world famous Moran-Alytics Podcast Chicken Wings Power Rankings: atmosphere, price point and service, but of course taste is far and away the most important factor. Whether I go myself or with an accomplice, I generally consume two flavors of wings per visit: traditional medium (or hot in some cases) and either something the server recommends or a flavor I see on the menu and am just feeling that day.

My first trip back in the 716 this week led me to The Lenox Grill near downtown Buffalo. This review and power ranking may come with controversy, as Korean BBQ is their signature wing sauce per the advice of several friends and Twitter followers.  To be honest though, I’m not a fan of oriental food and assumed I wouldn’t be a big fan. Get over it. Therefore, I went with 10 hot and 10 medium barbeque.

How were they? Quit being lazy and read on.

PROS:  Truth be told, I’ve been to plenty of places with all the bells and whistles but at the end of the day, the wings sorta tasted like shit.  The Lenox Grill scored huge for me with their traditional hot wings. I like a kick to my medium and/or hot wings but ain’t trying to need a towel around my head by the time I’m finished.  These wings were spicy but not overly done. Also, bonus points for their fries. My wife and I split an order with our wings and they were tasty. So much so in fact that a few wings were left on the table so we could demolish all the fries.  I’m also a fan of the look and feel with the establishment itself. I don’t know if it’s been around forever but it feels like it has. The men’s bathroom serves as evidence.

CONS: The medium barbeque wings were a bit bland compared to similar wings from several other spots I’ve had, to be honest. It’s not that they were bad, they just didn’t stand out—at all.   As for the hot wings, you may be a tad disappointed if you want your wings very hot.  You’ll probably want to step up to their suicide flavor for that effect.  They also weren’t particularly crispy, which is purely a preference thing and for me a plus. I personally don’t want my wings blazing hot nor ridiculously crispy. The portion size was overall pretty good but three of the medium barbeque wings were tiny. Doesn’t sound like a big deal, but if you’re sharing them with someone that’s a third of the order. Not cool, man. 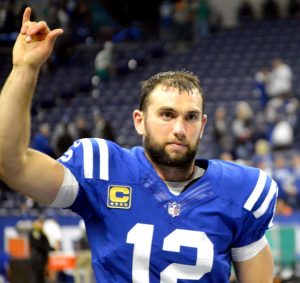 QB COMPARISON: The Lenox Grill is the Andrew Luck of chicken wings. You heard and read so much hype about coming out of college that you expected him to be one of the league’s better NFL quarterbacks before he even took a snap.  That certainly held true, but is he a Hall of Fame gunslinger? I’m not sure he is. Luck’s in the conversation right up there with the best, but does anyone think he’s a top five quarterback in the league right now?

RECORD IF SPORTSCITY PLAYED A FULL NFL SEASON: 10-6 playing in the NFL’s toughest division and competing for a playoff spot.

OUTLOOK: Many told me that the Lenox Grill is a top fiver for them. I’m not going to agree. They score high on the hot wings and mediocre on the more traditional barbeque. Do I regret not having their Korean BBQ wings? Possibly, considering how many told me I should.  All that said, they’re a top dozen wing joint in Western New York for me and the strength of their traditional hot wing alone gives me confidence you’ll leave this place satisfied.