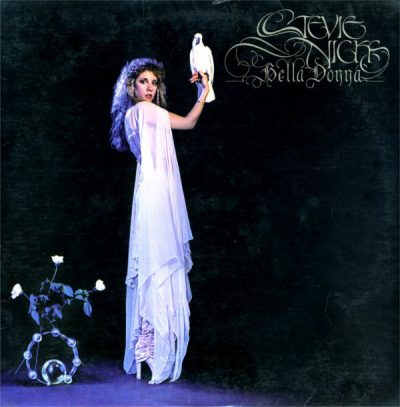 Notable Songs: “Stop Dragging My Heart Around”, “Leather and Lace”, “Edge of Seventeen”, “After The Glidder Fades”

Why I Loved It: Despite being barely 10 years old when this album dropped I’d already developed a little bit of an infatuation with Nicks because of her work (and beauty) with Fleetwood Mac.  “Tusk” was one of my favorite songs of the 70s and got me hooked on Nicks; which I suppose is another story for another time.  Anyway, a solo album with all Stevie Nicks tunes instead of sharing the spotlight with other band members? I’m all about that shit, boyeeee! Whether a young child or a grown ass aging man, I’ve never thought Nicks had the best voice or was the most attractive female on stage.  What makes me adore her is I her representing your regular ole’ everyday woman who’s willing to wear her heart on her sleeve, figuratively with her records and let things be what they’re doing to be.

Whether she assumes the prototypical rejected lover in “Stop Dragging My Heart Around” or ready to detonate in a blaze with the iconic “Edge of Seventeen” Nicks was and still is one of the female empresses of rock and roll.

I loved the California-feel 80’s soft rock and man, I loved me some Stevie Nicks.

Commercial Success: After longstanding success with Fleetwood Mac this was Hicks’ first studio album as a solo artist.  It was widely successful both critically and commercially. The album would rise to number-one on the Billboard Top 200 and would spend nearly three years there on the strength of four charting singles. “Stop Dragging My Heart Around”, a duet with Tom Petty was the album’s biggest single success—reaching number-three on the Billboard Hot 100 and finishing 1981 ranked 59th on the year-end chart.  The Don Henley duet “Leather and Lace” reached six on the charts while “Edge of Seventeen” climbed as high as No. 11 and “After The Glitter Fades” maxed out at No. 32.   The album would end 1982 eighth on the Billboard Top 200 and went on to sell more than four million copies in the United States.

Fun Facts: Courtesy of 102.9 Classic Rock MGK, here’s how “Stop Dragging My Heart Around” came to be: “Stevie met Tom Petty when he was recording ‘Damn The Torpedoes’ with co-producer Jimmy Iovine (who Stevie ended up dating).  She joked with Tom about him writing her a song for a solo album she was working on.  Petty didn’t think Stevie was serious until she approached him again a year later.  Petty gave her the song ‘Insider’ which she ended up taping with him and then deciding that it was a better fit for The Heartbreakers than her. The song ended up on Petty’s ‘Hard Promises’ album.

Petty and Mike Campbell recorded “Stop Draggin’ My Heart Around” and sent that along to Stevie.  She loved it.  She recorded the song with Petty. She enjoyed working with Tom so much that she asked him to produce ‘Bella Donna’. They gave it a try but they both agreed it wasn’t working.  Jimmy Iovine then came into the picture and produced the record. This created an interesting dynamic because Stevie and Iovine began living together while recording ‘Bella Donna’.”