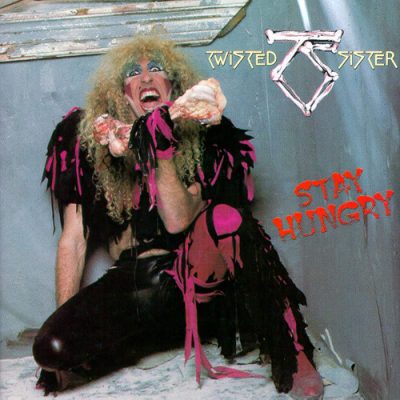 NOTABLE TRACKS “We’re Not Gonna Take It”, “I Wanna Rock”, “The Price”

WHY I LOVED IT:  I was a 13-year old when “Stay Hungry” came out and my expertise in hard rock music was—-not extensive.  My father force-fed me 50s music when I was very young and soft rock and pop were my preferences as I approached my teen years.  I won’t say “Stay Hungry” is a collection of some of the best hard music I’ve ever heard but I’ve also heard a lot of unwarranted hating on Twisted Sister through the years that bothers me. Yes, they were unequivocally one of the cheesiest hard rock acts of the 80s, but also one of one of the most fun.  Additionally, some acts become popular or at least strengthen their approval rating with their videos, and nothing was better than the intro to “I Wanna Rock”.  Twisted Sister led me to towards a brief admiration for hair bands like Motley Crue, Quiet Riot, Warrant and Whitesnake. I’m not sure of the exact timeline but I’m positive I liked Twisted Sister first.

COMMERCIAL SUCCESS:  “Stay Hungry” enjoyed moderate success commercially.  The album peaked as high as No. 15 on the Billboard Top 200 and rose as high as number-three in Sweden.  “I Wanna Rock” only got as high as No. 68 on the Billboard Hot 100 but reached five on the Norwegian singles charts.  “We’re Not Going To Take It” hit No. 21 on the Billboard Hot 100 and reached the second spot on the New Zealand singles charts.  The moral of the story, boys and girls is that Twisted Sister music actually charted better in countries other than the United States.  Go figure.

FUN FACT:  Twisted Sister front man Dee Snider once testified in front of the Senate.  From AXS: “In 1985, a group of politicians’ wives formed the Parental Music Resource Council, or PMRC, to lobby for increasing control and labeling over music with what the group considered questionable lyrics. “We’re Not Gonna Take It” was placed on the group’s “Filthy Fifteen” due to the song’s themes of rebellion and the video’s cartoon violence. Snider was called to testify before the Senate along with fellow musicians Frank Zappa and John Denver. Expecting a dumb rocker, Senator Al Gore hit Snider hard but found Snider to be a worthy opponent, with many believing Snider walked away with a clear victory.”

Also via AXS (an incredible site to find fun facts from all kinds of artists), Twisted Sister hated being called a “Glam” rock band.  Coming to prominence right in the middle of the “hair metal” period, Twisted Sister has never tried to distance themselves from their hair metal peers, but has rejected the oft-used “glam rock” moniker. Although they use makeup and traditional glam clothing, Twisted Sister was always more a parody of glam than a glam band, featuring five hulking men slathered in pancake makeup. Dee Snider is famously quoted as having said “I don’t think Twisted Sister is glam because that implies glamour. We should be called ‘hid’ because we’re hideous!”