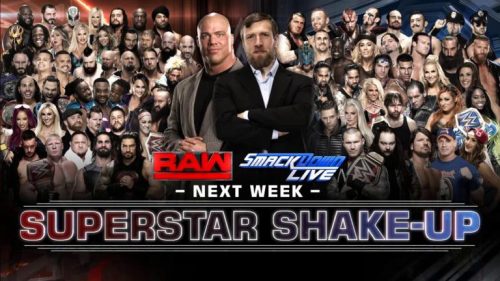 I was praying Smackdown would kick off with paramedics wheeling out the corpse of Roman Reigns— still strapped on the stretcher from Monday night thanks to our conqueror Braun Strowman and revealed as the newest member of the brand.  That didn’t happen.  Oh well.

♦ Instead, the show in Boston opened with newcomer Kevin Owens (clean shaven and all) out to begin the second night of the “Superstar Shakeup.” The United States champion runs down Americans and speaks some Canadian, which is pretty solid heel work. He says he’s the new face of America.

♦ This brings out Baron Corbin, who says Owens can beat up the entire arena and most of the locker room, but he can’t beat him up. He challenges him but Owens says he’s unworthy of a title match.  Out comes the second incomer to Smackdown, Sammy Zayn.  This brings out A.J. Styles, who lets Owens know that Tuesday nights is not the KO Show but the show that Styles built.

♦ Finally, general manager Daniel Bryan hits the ramp to make sense of everything. He announces a number-one contender triple threat match between Corbin, Styles and Zayn with the winner facing the U.S champion after Owens/Chris Jericho at the Payback PPV (Owens, duh).

♦ Erick Rowan and his creepy new mask takes on WWE champ Randy Orton.  Orton’s about to hit a RKO when Bray Wyatt appears on the Titantron, because that’s what always happens. Rowan gets disqualified after laying out Orton with the steel stairs. I guess this firmly sets up Orton as the face in the “House of Horrors” match with Bray at Payback.

♦ The USO’s take on American Alpha with the tag team championships at stake. They may literally be the only two teams on Smackdown at this point.  Jimmy and Jey win an exciting and well executed match in front of a crowd that didn’t care enough. Immediately following the conclusion Gable and Jordan were ambushed by Primo and Epico, now on Smackdown.  It should be noted they were wearing jeans (shirtless) and not referred to as the Shining Stars.

♦ Mojo Rawley to the ring with his boy Gronk in the front row; hardly surprising considering they’re in Boston.  Out comes another Smackdown newcomer, Jinder Mahal (fresh off giving Finn Balor a concussion last night) Like Wrestlemania but to a lesser degree Gronk gets involved, this time throwing a drink in Mahal’s face.  Rawley picks up the win and gets stays hyped with Gronk and ringside crew.  Mahal’s now lost twice in 24 hours.  Send him to NXT by tomorrow and let him complete the trifecta.

♦ Smackdown Commissioner Shane McMahon to the ring to address the Women’s division following Alexa Bliss and Mickie James’ departure for Raw last night. He brings out all the women, now down to Naomi, Natalya, Becky Lynch and Carmella (with James Ellsworth) to the ring before revealing who’ll join the blue brand. After typical internal bickering, Shane introduces Tamina Snuka.  He then introduces Charlotte Flair.  The queen is now on Smackdown.  The blue brand unequivocally won the women’s version of the Superstar Shakeup.

♦ Sin Cara and Rusev are announced as coming to Smackdown.  I know Rusev is hurt but he should never (ever) be consolidated into the same news promo as Sin Cara.

♦ Aiden English in the ring with a mic. He says he’s alone now (alluding to Simon Gotch being fired) and the spotlight is solely on him.  He starts singing and is interrupted by the music of the Perfect 10, Tye Dillinger. The crowd’s pretty into it and Tye wins with his “tiebreaker.” Enjoy the solid pops while they last, Tye.

♦ A promo is aired of Lana dancing, very seductively around a chair and coming soon to Smackdown. Interesting she wasn’t lumped into a photo with Rusev moments earlier—perhaps she’s flying solo and maybe even as a wrestler.

♦ Dolph Ziggler in the ring (street clothes) talking about the Superstar Shakeup. He says he’s built Smackdown and made it cool.  He keeps talking but the arena goes dark and Shinksuke Nakamura’s music hits as the roof blows off the TD Garden. Ziggler eventually tries to super kick him but Nakamura blocks and throws him to the ground. Ziggler teases a brawl but retreats.

♦ A.J. Styles defeated Sammy Zayn and Baron Corbin after hitting the phenomenal forearm on Zayn in an absolutely fantastic match—one of the best I’ve seen all year.

Quote Of The Night:

“I’m not here for any of you. I am here for me, and I am here to be the new face of America.” – Kevin Owens

♥ Nakamura is going to be the best thing to happen to the WWE in many years. It feels like a post-Wrestlemania Raw crowd each time his music hits and unlike several newcomers that come and go, it won’t end anytime soon.  Nakamura is everything we ever needed even if we didn’t know it. His blend of hip, distinctiveness and most prominently his in-ring capability to perform at an elite level in the ring gives him genuine staying power.

♥  On a whole I think Smackdown got the better end of the Superstar Shakeup.  Owens is among the best in WWE and a brand switch could jumpstart Zayn past lovable loser level.  Also, don’t count out Rusev having a significant role when he returns from surgery. With apologies to Alexa and Mickie, the women’s division undoubtedly got better with the addition of Charlotte Flair (and Tamina). Losing Bray Wyatt sorta sucked for Smackdown, but they’ll easily overcome the departures of Dean Ambrose, the Miz and the others not worth mentioning.

♥  An AJ Styles vs Kevin Owens U.S. Title feud is going to be incredible.

♦ Chad Gable and Jason Jordan should’ve went to Raw.  Smackdown has done a lot for many wrestlers over the past several months, but American Alpha aren’t among them.  There was next to zero pop for their pre-match introduction against the USO’s tonight—a title match nonetheless. Their next angle appears to be with Primo and Epico after being attached post-match. I’m pretty confident a feud with the Shining Stars (rebranded or not) will do little to regain any momentum they’ve clearly lost in 2017.

♦ Is Luke Harper hurt? I’m assuming so because it’s not good for his future if they couldn’t find a televised spot for him on the show. He’s one of those guys with potential that may never (get a chance to) realize it.  He’ll probably have a program with Erick Rowan coming but I think WWE would be better served to have them be a tag team again—Lord knows Tuesday nights need them.

♦ I totally expected and did not get Sheldon Benjamin tonight.  That makes me sad.

FINAL GRADE: 8.5 out of 10:  I like the new additions and the matches were on point, especially the tag title match and triple threat main event.  A little Nakamura offense on Ziggler would’ve saw this grade reach a 9 or 9.5.  Very good show tonight.