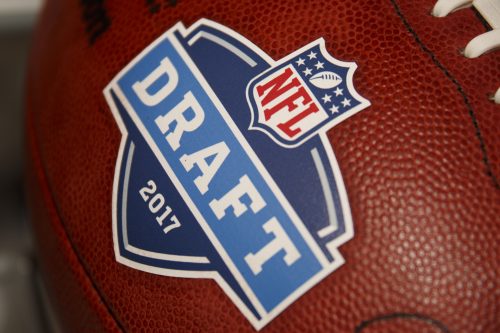 I didn’t go through the trouble of producing a mock draft.  They’re entertaining to glance at while envisioning the effect of each dart thrown at the board landing right, but I’m not nearly qualified to offer insight on who the Pittsburgh Steelers or Arizona Cardinals are leaning towards. Mock drafts are the ultimate NFL guessing game to keep fans engaged during the offseason and while making for great water cooler talk or website click-bait, depending on your perspective, they’re rarely close to accurate when all’s said and done.

Instead, I’ve focused my energy on having my eyes and ears on anything Buffalo Bills related. That along with some (hopefully) common sense has me locked in on who I think the Buffalo Bills will 10th overall Thursday night, assuming of course they stand pat, which is by no means inevitable.

First, let’s get rid of some candidates….

ALREADY GONE:  It’s a near-lock the following seven prospects are gone within the first nine picks in no particular order: Myles Garrett, Jonathan Allen, Solomon Thomas, Marshon Lattimore, Jamal Adams, Malik Hooker and Leonard Fournette. I initially didn’t have Fournette here, but someone will think he can do what Ezekiel Elliott did for Dallas last year—Jacksonville or Carolina, anyone?

THE MITCH TRUBISKY FACTOR: If he’s there at 10, I entirely believe he’s going to Orchard Park.  However, I don’t see him lasting nine picks.  There’s simply too many quarterback-needy teams ahead of the Bills and someone will snag him—whether it’s San Francisco (2nd), Chicago (3rd), the New York Jets (6th)—or someone trading up to leapfrog Buffalo (Cleveland would be the favorite).   Since 2001 there’s been but one year the top quarterback lasted until at least pick No. 10 and that was Buffalo in 2013, who infamously took E.J. Manuel 16th.  It doesn’t matter who takes Trubisky—I believe someone will before Buffalo gets the opportunity.

THE MISTAKE THEY’LL PASS ON:  I very much want someone to take Rueben Foster within the first nine picks. I’m aware of his injured shoulder that needed surgery, and also his diluted/failed drug test.  I still hope someone grabs him so I don’t have to deal with the frustration of the Bills passing him over (which they will). In my opinion he’s the third-best player in the draft after Garrett and Adams. Foster’s an every down, athletic heat seeking missile and the thought of him playing with former Alabama teammate Reggie Ragland has me salivating.  Unfortunately it won’t happen—I’m just hopeful it’s because one of the first nine teams made that decision for Buffalo.

THE FIVE CANDIDATES AT PICK 10 (Ranked from least to most likely):

5- Cam Robinson: He’ll (very likely) be the top offensive lineman off the board and the Bills can do a lot worse than snatching a day one starting right tackle.  The Bills inexplicably re-signed Jordan Mills this winter and who the hell knows what’s going on with Cyrus Kouandjio.  Seantrell Henderson is serving a (bullshit) suspension and may never be back for all we know.  I’m not overly familiar with Robinson but have read several reports, including a few that’ve compared him to Bills left tackle Cordy Glenn. He played left tackle at Bama but is capable of playing on the right side and even guard.  Don’t sleep on him.

4- OJ Howard: The Bills were reportedly in on multiple tight ends at the onset of free agency last month, including Martellus Bennet and Jared Cook among others.  This tells me the possibility of drafting an athletic stud like Howard to pair with Charles Clay isn’t just a smoke screen. I’m not sure what history new offensive coordinator Rick Dennison has with two tight end sets, and Tyrod Taylor hasn’t utilized Clay enough let alone a second tight end, but it’s hard not to be excited about the thought of Howard in a Bills uniform.

3- Haason Reddick:  He’s shot up (mock) draft boards and is becoming a very popular selection to the Bills. There’s several reasons why.  Linebacker is an important position in a Sean McDermott defense and Reddick has incredible range and can play all three linebacker spots.  He’s an explosive edge rusher and very capable in coverage. He’s also regarded as a high character guy, a trait I’m sure McDermott covets.   His downside is being a little undersized (237 pounds) for the NFL position he’ll play.  Still, he’s a legitimate possibility at 10, one that likely wouldn’t be met with much fanfare and could lead to Preston Brown’s departure. I guess you can call him a poor man’s Khalil Mack, which isn’t disrespectful to Reddick considering pretty much any hybrid DE/LB is a poor man’s Mack by comparison.  Reddick’s the name I’ve seen most associated with the Bills in the last round of mocks.

2- Mike Williams: This by far feels like the most sensible pick the Bills can make. For starters, Buffalo’s current receiver depth behind Sammy Watkins is laughable: Andre Holmes, Walt Powell, Brandon Tate, Kolby Listenbee—please God make it stop.  Beyond just depth, Williams possesses all the traits you look for in a potential elite receiver.  Athletically he’s an intriguing combination of height (6-4), weight (218 lbs) and speed (4.5/40).  More importantly than gym short measurements he was insanely productive in a great Clemson offense, having 98 receptions (second-most in school history) for 1,361 yards (third-most in school history) in 2016. He’s big enough to be a possession receiver and fast enough to be a downfield threat.  In other words, he’d be a perfect fit with Watkins, assuming the fellow former Clemson star can manage to stay healthy.  If he can’t that makes having a guy like Williams all the more important.

Williams would be my Bills pick at 10 if I were calling the shots, assuming Foster was already gone.  However, I’m not.  Terry Pegula is and therefore the Bills will draft…

DeShaun Watson: I think the Bills take a quarterback in a selection spearheaded, mandated or whatever you want to label it by Pegula himself.  Buffalo spent several weeks—hell, months deciding if they’d bring back Tyord Taylor before agreeing to a restructured deal that essentially puts them in the exact same position next winter.

I think he’s on borrowed time, with the 2017 season being said time. I don’t think the coaches and certainly not Pegula see Taylor as the long term quarterback of this team.

The Bills worked out all of the top quarterbacks in this draft, the interest (in my opinion) is legit, and it’s no accident Pegula was on hand for the private workouts of Trubisky, Watson, Patrick Mahomes and DeShone Kizer.  Call it a smokescreen—I call it Buffalo’s drafting what they hope will be a future franchise quarterback with a top 10 pick, and the owner will be the one signing off on it.

Early in the draft process Watson seemed a top five lock. Combine and pro days are great as are but let’s not forget what Watson did at Clemson.  On the grandest stage he threw for 420 yards and three touchdowns while scoring another with his legs as Clemson knocked off Alabama to win the National Championship. The two-time Heisman finalist is a winner on the field and by all accounts a standup guy and leader off it.

I see him sitting and learning behind Taylor for a year before taking over in 2018. I know taking a non-starting quarterback in the first round in lieu of an instant starter won’t help in 2017 but let’s be real—the Bills aren’t contending for a championship this year regardless of who the pick is.

Having a franchise quarterback ready to start in 2018 could change Buffalo’s fortunes. It’s a chance I very strongly suspect Pegula will take this year—whether his administration agrees or not.