The euphoria of feeling like I’m uncovering some of the biggest hidden gems for great wings has been my single-favorite part of visiting so many places during this recurring series.  I’ve been to Wiechec’s in Lovejoy on multiple occasions and for me, their Beef on Weck straight up rivals Bar Bill, Charlie the Butcher, Kelly’s Korner and a few others as the best in Western New York.

I never had the wings before though, and because of my past love affair with the beef I wanted to give Wiechec’s a shot.  Could I add another mostly unknown treasure to the upper tier of my chicken wing power rankings?

Unfortunately the answer is no.  Read on.

PROS: Honestly speaking with respect to their wings, not much. They were cooked perfectly acceptable and I not having to wait very long was a pro. That’s all I got.

CONS: Just about everything else. The sauce was as basic Frank’s plus butter ratio tasting as it gets. The wing size was well below average compared to several other places and I felt like I could have these wings where I currently live in Florida which I promise is not a compliment.

One other thing as well —the parking absolutely sucks, one of the worst in Western New York.  They have an abnormally skinny parking lot that holds maybe 10 cars and you literally can’t turn your car around once parked unless two or three spaces next to you are empty. As a result you’re driving backwards out from the driveway into a sometimes busy Clinton Avenue. It’s not fun. 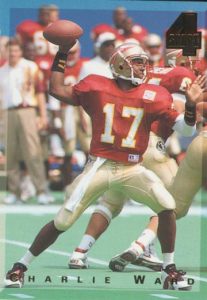 QB COMPARISON: Charlie Ward. Sure he won a Heisman but would’ve sucked as a NFL quarterback. However, he spent a successful decade in the NBA as a very good role player.  Basically, Wiechec’s is brilliant at other food items and consumers should stick to those.

RECORD IF WIECHEC’S PLAYED A FULL NFL SEASON: 4-12. There’s no less than two pizzeria spots in the neighboring Lovejoy area better for wings. Get them instead.

OUTLOOK: There’s no need to come to Wiechec’s if your primary purpose is chicken wings. It’s almost a lock you’ll be disappointed, especially if you get the traditional medium and have goals of anything beyond mediocre.

Having said that and this is important— let me emphasize that Wiechec’s is NOT known for exotic tasting wings.  Their strength, one I can personally vouch for is having one of the elite Beef on Weck sandwiches you’ll get in Western New York. It’s so good, vastly underrated and belongs up there with the best.

They’re also kind of underground famous for Friday Fish Fry’s and pull big neighborhood crowds because of it.