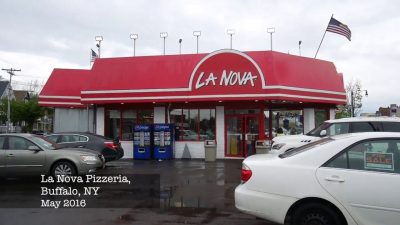 As someone raised on the west side and actually having delivered pizza at the original location as a teenager I’ll always have a huge soft for La Nova. However, as a much respected journalist and host of the future award winning Moran-Alytics Podcast, I’d be doing legions (or dozens at least) of fans a huge disservice if I didn’t offer a completely unbiased review.  La Nova is famous, quite literally (if you don’t believe me go check out their wall memorabilia) for two things —- pizza and BBQ chicken wings   This critique ain’t about pizza but it’s very much about the wings so on that note, let’s talk about em.

PROS:  La Nova is famous for BBQ wings and needless to say they live up to the hype. I’m sure opinions will differ but for my money, there’s not a better BBQ wing in Western New York.  Considering how famous the place is, $19.99 for a double order of wings isn’t bad at all.  If you go to the original west side location I can’t think of a better time passer while waiting than checking out photos of some of the dozens of celebrities that’ve eaten there.

CONS: I wouldn’t necessarily call it a con but their traditional medium/hot wing isn’t up to par with some of the best around town.  They’re not bad, but not good to have them rated as an overall Top 10 place for wings. If my rankings were based solely on regular medium/hot wings La Nova would only be middle of the pack.  Also, I’m a far bigger fan of the original location as opposed to the one on Williamsville. That place doesn’t feel authentic to me—at all. 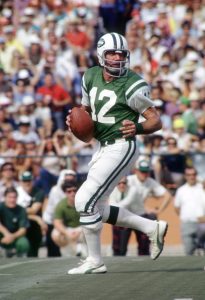 QB COMPARISON: Joe Namath.  Hear me out.  Namath’s a legendary quarterback and Super Bowl champion.  He was also called “Broadway Joe” in part cause dude sold out some for the bright lights.  I feel the same about La Nova — now the official pizza of the Buffalo Bills….and Sabres….and Bisons…and probably everyone else.  As amazing as Namath was, perhaps he could’ve been even better had his focus remained exclusively on football—that and didn’t develop bum knees.

RECORD IF LA NOVA PLAYED A FULL NFL SEASON: 10-6.  They will drop a few games for sure but you know you’re gonna be in a dog fight every Sunday. La Nova is perennially competitive with everyone.

OUTLOOK: For wings at a place primarily known for pizza, La Nova is king. I consider them the Madison Square Garden of pizzeria wings and for that I have them power ranked higher than any pizza joint for wings, ironic considering I actually find the pizza a tad overrated. If my only criteria were a specialty wing, their BBQ wing would easily be top five.  The ordinariness of the traditional medium/hot knocks it down to the 10-20 range but again— you won’t walk into a pizza place and do better.