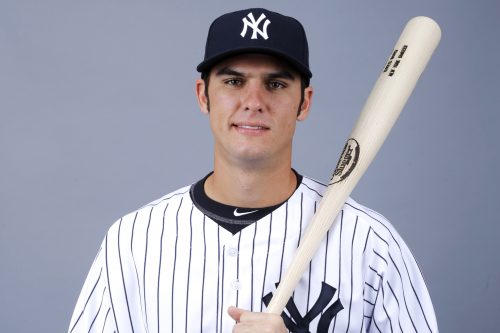 The Yankees placed first basemen Greg Bird on the 10-day disabled list Tuesday with a bruised right ankle. The 24-year old has been (mostly) playing on the sore ankle since fouling a ball off it during a spring training game in late March.  Yankees manager Joe Girardi said Bird had a MRI in New York this week along with one a few weeks ago and both showed a bone bruise.  Rob Refsynder was recalled from Scranton to take his spot on the roster.

After a strong spring training that had Yankee fans buzzing, Bird’s been downright abysmal at the plate early in the season. He’s had just six hits in 60 at bats (.100) and has struck out in nearly one-third (30.6% to be exact) of his 72 at bats.  He has just one homer, three RBI and is sporting an embarrassingly low .450 OPS.

♦ I have plenty of faith that Bird’s woes April plate woes had amply related to the nagging ankle. Obviously I never played baseball at an elite level but I’ve swung a bat enough times to know driving the ball starts with your ankles.  Without being qualified to examine Bird’s swing post-injury I imagine he’s (unsuccessfully) revamped his mechanics to try and compensate for the sore ankle.

♦ My faith is based on watching him tear the cover off the ball in spring training.  Bird hit .451 (23-for-51) while drilling eight (!!!) home runs and driving in 15.  I can keep giving stats for days but beyond numbers his swing and contact looked more pure than any bat on the roster—and I’m including fellow young studs Gary Sanchez and Aaron Judge.  I never expected Bird to replicate his ridiculous spring numbers once the bullets were real, but his swing looked far more fluid than it does now.

♦ Don’t discount the positive effect having time to heal may have on him mentally.  Injured or not it’s had to be emotionally draining to get off to such a futile start, to the point many (including myself) thought a trip down to Triple-A Scranton may help his game.  Plenty is expected of Bird this year and rightfully so—he’s enormously talented but the truth is he’s been the poster child for a “rally killer” early in the season.  Perhaps a break where he does literally nothing for the next 1-2 weeks will help his mind as much as his body.

♦ I know Chris Carter will see the majority of work in Bird’s absence, but I’m totally ready to see Matt Holliday play some first base.  I know there’s a majority out there willing to live with Carter’s shitty batting average and contact rate because of his formidable power, but I’m not among them.  His .219 batting average and 14 K’s in 41 at bats thus far aggravate me and it’s unlikely to improve. I want to see Holliday more than Carter.

♦ Lastly, it really sucks the Yanks can’t get their trio of young bats healthy at the same time. Just as Sanchez nears his return we see Bird shut down.  Having said that, resting Bird now is definitely for the best—seeing he couldn’t be much worse.