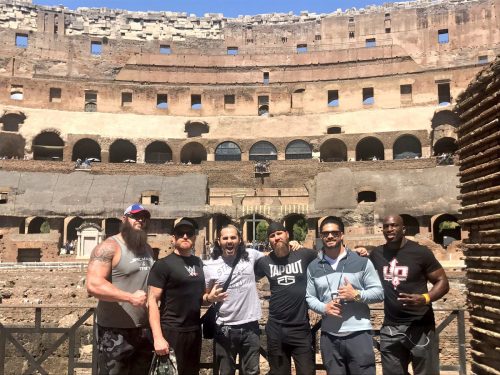 WWE is touring Italy and has a live (Raw) event tonight in Rome.  Titus O’Neil posted a few photos featuring some of the rassler’s enjoying their down time, and one includes bitter rivals Braun Strowman and Roman Reigns together at the Roman Colosseum.

Considering Reigns is nursing “internal injuries” and Strowman suffered a “torn rotator cuff” after running through an ambulance door Sunday night, the pair seems to be doing well and enjoying each other’s company. I guess Braun wasn’t lying when he told Roman he’s not done with him.

Jokes aside, Strowman and Reigns have built one of the hotter feuds WWE has seen in quite some time, so for O’Neil to post a photo with them both is indeed a rare peak behind the curtain.

Next thing you’re going to tell me is wrestling isn’t real.