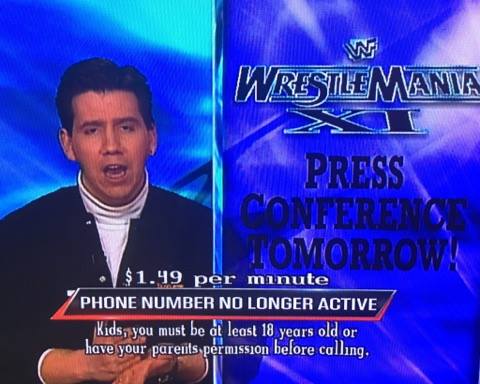 My blueprint is to fast forward 25 episodes per recap.  That should progress events along enough so I’m not blogging about the same shit each time out.

I started with episode 100 in my first recap, so this is the second time around with this—where we arrive in late Summerlike a good place to start, so without further ado…

Promos for Lex Luger in advance of his match with Tatanka.

Luger (with Chief Jay Strongbow) defeated Tanaka (with Ted Dibase) via count out.

NFL (future) Hall of Famer Lawrence Taylor joins Raw via satellite.  Footage is shown of Taylor at ringside (as a guest of his “friend” Diesel) and shoved by Bam Bam Bigelow at the Royal Rumble last month.  Taylor says he’s weighing his options on what to do about it, and ultimately Bigelow joins in on a split screen and talks trash.  They agree to meet each other at a press conference in New York City promoting Wrestlemania XI the following day.

Doink the Clown (with Dink) beat Bob Cook after his “whoopee cushion” finisher.

Highlights are shown of last month’s Royal Rumble— one Shawn Michaels won (as the first entrant) by defeating the British Bulldog.  The two are slated to have a match on Raw next week.

Kama dominated a jobber named Ken Raper (who looked a lot like Barry Horowitz but wasn’t) before winning by submission.

British Bulldog interview/promo in advance of his match with Michaels on Raw next week.

Discussion of the following morning’s Wrestlemania XI press conference in New York. Todd Pettengill breaks things down as Raw goes off the air.

♦ At one point Tatanka slapped the feathers off Strongbow’s head on the outside—prompting a very old Strongbow (67-years old at the time) to chop Tatanka several times in plain view of referee Earl Hebner.  However, Hebner didn’t disqualify Luger.  Boo!

♦ Jokes aside, this hardly surprises many who remember  WWF Luger matches but everything about this was atrocious, ranging from overall execution to the match lasting three segments only for Tanaka to then decide to leave intentionally get counted out. Seriously, people sat at home and watched two sets of commercial breaks for a match to conclude with a count out.

♦  I may not be the ultimate connoisseur of all-things WWE, but I’m a bigger fan than most.  I simply don’t remember Ted Dibase ever being aligned with Tatanka. I imagine this didn’t last long and eventually turned on him.

♦  Can’t understate what a huge star and big deal it was having Lawrence Taylor appear on Raw (albeit satellite) and build towards a Wrestlemania match.  At the time Taylor was only roughly a year removed from retiring as arguably the greatest NFL defensive player that ever lived, and his popularity level is comparable to a guy like J.J. Watt or Gronk now.  His ultimate involvement at Wrestlemania XI in a match (along with football buddies) against Bigelow (and his buddies) was a massive coup for WWE at the time.

♦  People think of Shawn Michaels winning the Royal Rumble in 1995 despite being the first entrant as the face-hero, but in reality HBK was very much a heel at the time. He won because the British Bulldog made the mistake of thinking both of  Michaels’ feet had hit the ground and then let his guard down to celebrate.  Michaels eliminating the Bulldog was actually a heel move.

♦  Kama (the future Godfather and conductor of Ho Trains all over) was known then as the “supreme fighting machine”.  His attire consisted of an ugly red amateur wrestling outfit with white t-shirt underneath and a big black belt labeled “Kama”

♦  This was still, at the time a continuation of the long-standing wrestling tradition of hardly matches involving big names facing each other. That must be hard to believe for young WWE used to seeing title matches and marquee main events nearly every week on Raw and Smackdown. This episode (actually recorded the week before) aired four matches, with Luger vs Tatanka the only one involving guys both established to any degree. Again this was common—most TV matches were squashes back then and many years before.

♦  This was also the era of 900-numbers to get “inside” wrestling info.  Several times throughout the show Jim Ross’ hotline was plugged for his hourly updates from the press conference coming the next day.  Just $1.49 per minute!

♦  That’s literally how the show went off in the air.  Back in 1995 a Monday Night Raw ended with Todd Pettengill plugging a 900-number for fans to call.