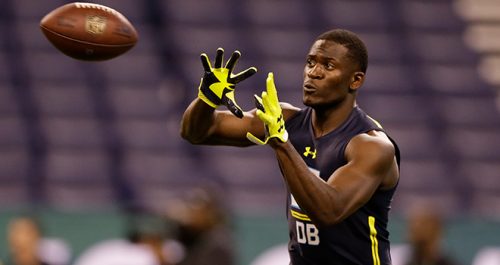 Tendering my thoughts on the Buffalo Bills 2017 NFL draft late Sunday/early Monday as opposed to real time is no accident. I’m inherently wired with a formidable tendency to dramatize everything the Bills do and express knee jerk reactions in lieu of marinating thoughts before penning opinions.

I decided this year to mentally process the draft a full 48-72 hours before contributing any written analysis, other than initially bitching about their first pick on Facebook.  Also, if I’m being honest I was also entertaining company in Florida and didn’t have the time to accumulate an inventory of thoughts before now, so whatever.

I’m vigilant with immediate reactions to a Bills draft and being overly gratuitous with my words in particular due to what I call the “2006 rule”.  That year, while writing for Scout.com I utterly gushed over the Bills draft, of which I lauded the crop of Donte Whitner, John McCargo, Ashton Youboty and Ko Simpson as instant difference makers towards Buffalo becoming one of the elite defenses in the NFL under then-new coach Dick Jauron.  To make matters worse I barely mentioned Kyle Williams, the one actual great Bills pick other than passing him off as a good “value pick”

Needless to say, I tend to err on the side of lingering at neutral when it comes to draft analysis and grades.  Having said that, I’m mostly pleased with what the Bills and head coach Sean McDermott did over three days.

Let’s dive in with some thoughts and grades of which I very well may regret later in life.

My sentiments were all over the place with this pick. With the Bills choosing 10th, I disbursed all my pre-draft energy compiling my “top ten” in lieu of a mock, recognizing Buffalo were guaranteed at least one from my wish list. My eyeballs popped through the heavens after the Bengals grabbed John Ross with the ninth pick, as five of my projected top ten were shockingly (to me) there for the Bills: Jonathan Allen, Marshon Lattimore, Rueben Foster, O.J. Howard and Malik Hooker.  I screamed at my television for McDermott (let’s not kid ourselves—he was calling the shots) to draft Hooker—I mean literally screaming, so you can envision how demoralized I felt when the Bills traded down. It’s not that I detested the Bills trading down; I just thought dropping down to No. 27 was too far to grab an impact player and therefore, hated the deal.

My dejection changed when it was announced the Bills were gaining the Chiefs’ third-rounder and far more importantly, their first in 2018.  For a Bills team in need of “rebuilding” more than they care to admit, picking up (at the time) an extra third with two firsts next year is huge— enough to get over the disappointment of not having Hooker anchor the secondary for years to come.

As for the selection of White, I wasn’t pleased when Roger Goodell made the announcement. I really, really wanted Buffalo to take Foster at 27, as I thought it was an applicable spot where the risk didn’t feel as detrimental as using a top ten pick.  Foster has issues without doubt, but he’s also a top five talent. I wouldn’t be shocked to see him become a perennial Pro Bowler in San Francisco (the 49ers moved up to take him four picks after the Bills passed).  The other reason I originally loathed the pick, one I debated amongst friends was that by drafting White he’d at best be an adequate replacement for Stephon Gilmore, and therefore not making Buffalo any better than they were in 2016.

Admittedly it’s a narrow-minded thought but that’s how I was feeling.

In actuality there’s plenty to like with White.  He was the consensus second-ranked cornerback in the draft and grabbing him late in the first round sounds like good value. I won’t bore you with specifics you probably know by now, but here’s some things about him via a New York Upstate Article by Ryan Talbot.

I uphold my belief the Bills should’ve taken Foster, due to both his ceiling and the Bills being thinner at linebacker than corner, but with Ronald Darby and Kevon Seymour the incumbents’ corner is unquestionably a need too. White is a good player and a smart one as well.

MoranAlytics Grade: (A-) I like White but preferred Foster. I loved getting a starter and a first-rounder next year.

Buffalo moved up seven spots with Los Angeles Rams to draft Jones. In doing so they gave up the third-rounder they acquired from the Chiefs on Thursday while gaining pick No. 149 in the fifth round. I’d be faking it if I told you a whole lot about Jones. Some love him—saying he’ll be a 75 catch receiver in a year and others, not so much. I know of him and did as much pre-draft reading as possible, but I’m not qualified to offer specific insight.

I wanted the Bills to go receiver in the second round but preferred JuJu Smith-Schuster, although admittedly that was mainly because of his splendid name.  Jones has all the physical ability you could want in a No. 2 receiver and the college production to match it.

It was a laughable smokescreen from the team that they were happy and content to go into training camp with Andre Holmes as the second receiver behind Sammy Watkins. Holmes will have a role but it shouldn’t be as number-two.

Unlike White, who I think at best becomes a suitable replacement for Gilmore, I think Jones can ultimately become an upgrade over the guy he’s replacing, Robert Woods.

For a third time in as many opportunities the Bills dealt away from their originally scheduled pick, this time moving up 12 spots from 75 to 63.  Doing so also cost them picks No. 149 and 156 overall (both fifth-rounders).  With it they selected offensive tackle/guard Dion Dawkins.  Dawkins started at left tackle for Temple in 2016 but is likely to play right tackle or possibly guard.

I’m totally on board with Dawkins mainly because offensive line talent, at least that of starting caliber was getting razor thin by this point and Dawkins has a magnificent opportunity to come in and start immediately.

That’s largely due to Dawkins’ ability, but also because Jordan Mills was a calamity at right tackle last year.

Many analysts had Dawkins listed as a guard but it’s believed he’ll play tackle in Buffalo. He sports an impressive 6-4, 314-pound frame and long (35-inch) arms.  I mean, maybe someday he slides in at guard for Richie Incognito or John Miller, but I dig the sound of him at tackle much better.

MoranAlytics Grade: (A-) This was very much a “need before BPA” pick for Buffalo, and I’m perfectly fine with it.  With so many huge Bills storylines in play this offseason, Mills’ deplorable play at right tackle went totally under the radar. Re-signing Mills mystified me and hopefully this pick relegates it to purely veteran depth. It appears Buffalo got their third starter in this draft. Only giving up three picks to get him marginally penalizes this grade from being a solid “A”.

The Bills finally made a choice originally owned in tabbing Milano, a 6-0, 223-pound linebacker.  Saying I’ve heard of Milano is about the extent of insight I can provide. I know nothing of his skillset, so let’s refer you to the brilliant Bills draft work of WKBW’s Joe Buscaglia instead.

MoranAytics Grade: (C) I guess it feels like Milano fits the bill at this point of the draft.

Unlike Milano, I’ve seen plenty of Peterman with my own eyes.  While I suggest Mel Kiper talk that he could have Tom Brady-esque potential is freegin’ preposterous, I like Peterman and love Buffalo getting him in the fifth round even more, especially since plenty of pre-draft chatter had him going in the second or third round.  Peterman has a keen understanding of running a NFL offense and the arm strength, accuracy and tangibles to eventually develop into a solid starting quarterback if everything goes his way.  I watched when Peterman led Pittsburgh over Clemson last year when he threw for 308 yards and five touchdowns.

For the record, this is the first time the Bills have taken a quarterback in consecutive drafts is more than 30 years. Peterman will likely be downgraded to clipboard holder as a rookie, but unlike Cardale Jones and T.J. Yates, I’m confident his job for 2017 is secure.   Meanwhile Jones and Yates will fight it out in camp with the winner earning the backup job and loser likely getting a pink slip.

MoranAlytics Grade: (A) There’s nothing not to love about a developmental quarterback in the fifth round with legitimate future starting potential. If I were the Bills brass I’d have made the exact same decision.

Just like Milano, I can only assume he’ll likely compete for the right to provide depth and contribute on special teams?  NFL.com’s Lance Zierlein gives him a decent review in his player breakdown, so let’s take his word.

MoranAlytics Grade: (C)  Seems like the stereotypical sixth-round pick to me. A lack of any linebacker depth (at all) gives him a fair shake to make the roster out of camp.

At the risk of overplaying my hand (see top), I see this as a very good Buffalo draft.  With the current personnel at right tackle it would take a dreadful Dawkins showing at camp to not produce three rookie starters. While I personally favored Foster and Melifonwu over White and Jones respectively in the first two rounds, it’s undeniable the latter two will be day-one starters if they get through camp healthy. I love Peterman as a low-risk, high-reward decision that conceivably 2-3 years down the road pays off handsomely.

Perhaps most importantly Buffalo got an extra first-round pick in 2018. Even a pick destined to be somewhere in the 20’s it gives a rebuilding team (like it or not it’s true) far more options this time next year.

Cumulative MoranAlytics Grade: (A-) I laid out all the positives.  My lone negative that keeps this minus slithering after the “A” is moving up twice in the second round. I would’ve preferred they stayed put or continued moving back to accumulate more picks on a team with many holes to fill.

Speaking of, there’s many on the roster.  Linebacker is a problem and I’m not confident Milano or Vallejo will change that.  Clearly the Bills like free agent signee Jordan Poyer at safety more than most fans or the media because the team not only passed on Hooker and then Melifonwu in the first two rounds but didn’t take a safety at all.  Early activity in free agency showed the Bills are interested in adding to the tight end position, but none were selected last week.

At the end of the day leaving Philadelphia with two sure-fire starters and a near-lock third is a commendable job.  The next general manager in conjunction with McDermott has work to do between now and training camp to get more quality depth on the roster, but this was a good start.