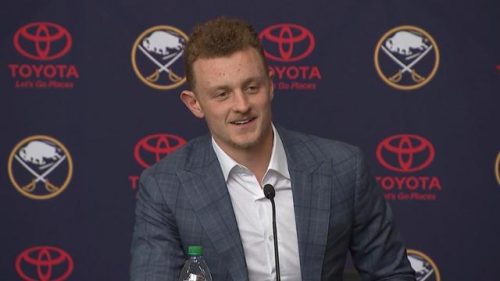 Jack Eichel has earned his first trip to the NHL All-Star game as a member of the Atlantic team.  The Buffalo Sabres forward, who leads team in goals (17), assists (22) and points (39) is Buffalo’s lone representative.  The game is being played at the Amalie Arena in Tampa on January 28th (I may attend this) and as has been the case since 2015, is a three-on-three format with players consisting of four teams: Atlantic, Central, Pacific and Metropolitan divisions.  The teams compete for a $1 million winner-takes-all prize.

MoranAlytics Take: My first instinct was to blow this off, as every team in the league is required to be represented and Eichel’s clearly the best player on the lowly Sabres.  Upon further review Eichel’s appointment is deserved regardless of how lousy the team is he suits up for.  His 39 points are good for eighth-best among skaters in the Atlantic division while his 17 goals are tied for fifth.

The Sabres are second-last in the NHL with 29 points through 43 games and dead last in goals scored (96).  That’s with Eichel — I can’t begin to imagine how horrific they’d be without him.

Hopefully this is the first of what will be many All-Star weekends for the 21-year old. While Buffalo’s as a whole has been an unmitigated disaster Eichel’s one of the precious few players pulling his own weight. Of course, that’s the expectation when you sign an eight-year, $80-million contract. He’ll probably get far better should the day come when management and the coaching staff find him linemates that can consistently perform. I’m over seeing him skate with the Zegmus Girgensons and Benoit Pouliot’s of the world.

I’m sure Evander Kane (16 goals, 35 points) warranted consideration for selection but only six forwards are named to each team.  If you think Kane was snubbed, please tell me who should be yanked in favor of him among Aleksander Barkov Nikita Kucherov, Brad Marchand Auston Matthews and Steven Stamkos?  Plus, after a blazing start to the season Kane’s cooled off considerably of late, netting just two goals over his last 12 games.

Perhaps sensing his days in Buffalo are numbered has played a role in his recent slide.