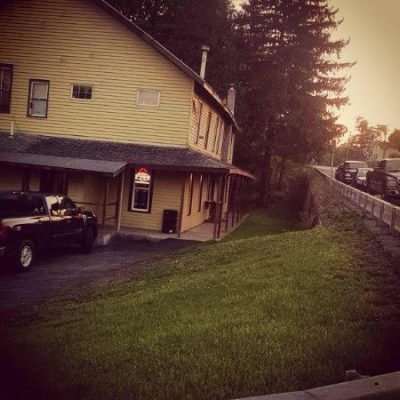 Of all the spots I didn’t get to among the first 40 wing reviews I’ve done, the Wales Center Hotel in is among the most requested, which made me realize I can’t have a serious review/ power rankings list without trying them.  Are these wings worth the considerable hype I read on Twitter or do they just have some cult following who wouldn’t know a good wing if their deep Southtown lives depended on it? Well, read on.

PROS: The exterior may look like a cutaway scene from Norman Bates’ Psycho but the interior is quite cozy. It’s an old bar with that comfy old school feel so many, including myself love.  The bar’s plenty big and if you don’t want to sit right at the bar there’s plenty of table seating as well as the ability to eat outside.  The wings were plenty big, very tasty and if you love crispiness you’re really going to be in luck. I asked for as many flats as possible (sorry drumsters) and with no questions asked my order came all flats (no upcharge either). The bartender (Michelle) was friendly and conversational without being overbearing and everyone in the place seems friendly. The price for a single order is extremely reasonable ($11) and if you’re into wing specials, you can have literally all you can eat wings on Wednesday nights for just $6.50. 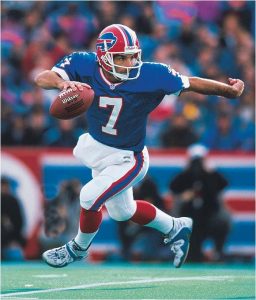 CONS: While tasty they verged on not saucy enough. To be fair they gave me a side bottle of hot sauce (and not just straight Franks but their mixed sauce) but it’s not quite the same.  Also, they flirted with almost being too crispy, which surely has crisp lovers rolling their eyes. The exterior looks like a place you may enter and never come out of alive, which may scare uppity snobs away.

QB COMPARISON: Doug Flutie. You won’t go 16-0 if he’s your quarterback but he’s good enough to have you waking up every Sunday thinking you’re winning. I had to land on a quarterback who played in so many years in Canada because to anyone north of the city Wales feels like it’s an entirely different country.

RECORD IF WALES CENTER HOTEL  PLAYED A FULL NFL SEASON: A healthy 10-6.  Not a threat to win the Super Bowl but much like the very early 80’s Buffalo Bills, you’ll feel pretty good following them.

OUTLOOK: The biggest knock against Wales for the majority of Western New Yorkers is the location. It’s a far ride for most and I’m talking 30-40 minute ride or longer for anyone north of Orchard Park, which brings into question if it’s a destination wing spot.  To be a destination spot where time spent getting there isn’t a factor in my book, you need to be in that elite tier of wing spots.  Truthfully, I don’t think Wales Center Hotel is quite there. I needed to try them for this review but I’m not sure I’d drive from Clarence to Wales on a regular basis for them.

Positively make no mistake about this though—-if you live within a reasonable drive and/or don’t care about mileage on your car this is a spot I’ll bet you’ll leave happy.   It’s friendly, it’s affordable and the wings are good—definitely top third in Western New York good.  If you fancy yourself a wing aficionado this place without question needs to be on your try list.