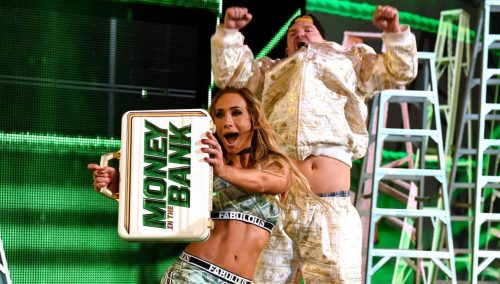 Let’s skip the pleasantries.  Sunday night was Smackdown’s turn to put on a PPV and “Money in the Bank” was a huge pile of shit.  Not just any shit—but a steaming, stinking pile of it. It was appalling, one of the worst shows I’ve bothered to watch in its entirety in a long time.

Many angles perturbed me but two things in particular stand out.  The first was the men’s version of MITB going on as the main event. To me it entirely cheapens the actual WWE championship.  I get Jindar Mahal isn’t going to put a ton of asses in the seats but for Chrissake, if you’re going put the strap on someone maximize its significance.  The message, based on last night’s show is whoever wins the right to challenge for the championship is bigger than the champion.  That’s trash.

The other, even more vexing was their handling of the first-ever women’s MITB match. What should have been a momentous night featuring women who’ve worked their asses to get there (Charlotte Flair, Natayla, Carmella, Becky Lynch and Tamina Snuka) was pissed on by WWE booking with the dumbest conclusion conceivable — a man, albeit idiotic one in James Ellsworth climbing the ladder himself and tossing the briefcase to Carmella for the win.  I’m all for a heel holding the briefcase—I think it works better that way, but at least stack the odds in her favor and let her climb the ladder to retrieve the prize herself.  If you want to interject Ellsworth have him clear the ring and hold the ladder for Carmella or something.  To make matters worse the refs were outside arguing over the validity of the win like clowns  before Ellsworth says fuck it, grabs the mic himself and declares Carmella the winner.  Her music plays and that’s that.  From the refs cluelessness to the women having their moment overshadowed and WWE creative shitting on the sacrosanctity of a historic match, everything about this was irritating.

Jindar Mihal beat Randy Orton: While Mihal got the expected victory, seeing you can’t slap the belt on him and try to build nuclear heat just to drop the strap in a rematch a month later, the match itself was a little overly foreseeable.  Orton, wrestling in his hometown (a sure-fire way to lose) got to hit both the Singh Brothers with his RKO—one through a table before Mihal using the distractions when Orton got back in the ring to hit his finisher and score a clean pin.  I expect Mihal to remain champion until Summerslam before All-American superhero John Cena takes it away and breaks Ric Flair’s record in the process.  As for Orton, who knows where he goes after this. He doesn’t seem to fit into any current program.

Naomi taps out Lana: Ridiculous that her first-ever singles match is for the women’s championship, but to her credit Lana held her own in the ring. Thankfully WWE’s fantasy booking didn’t go overboard and put the belt on her immediately. It’s one of the few things booking got right tonight.

New Day beat The Usos by countdown: The tag champs intentionally got themselves counted out to retain their titles.  Who whudda thought? I have no problem with the USO’s keeping the belts for now and they’re doing good heel work lately but still—I would’ve liked to see what was a fantastic match have a more thought out conclusion than this insipidity.

Debut!: Maria and Mike Kanellis (who has taken her last name) debuted with a promo about the “power of love” and it may have been the highlight of the show, sadly. Maria is an established schemer and underrated talker. I can’t wait to see where this angle goes.

Breezango beat The Ascension: Umm, yeah. It wasn’t American Alpha that attacked Tyler Breeze after all.  At least we got to see a Fashion Police vignette beforehand.

The Hype Bros beat the Colons during the preshow: Aside from the men’s MITB this may have been the best actual wrestling match of the night.  No heel turn from Zach Ryder…yet.

Summary/Grade: I haven’t watched a WWE show from start to finish in several weeks and a PPV like this gives me little hope I’ll want that to change. They essentially used a history-making match involving the women to immediately via Twitter hype a returning GM Daniel Bryan address to the live crowd on Tuesday.  As for the men I have no problem with Baron Corbin winning, despite the fact I can’t stand him as a performer and talker.  In fairness, the briefcase is meant to be in possession of a swarmy rat that’ll pounce on a valiant fallen champion and in that regards Corbin fits the bill perfectly.

Grade: (F). I detested everything about this show that involved wrestling and booking from top to bottom.  The arrival of Maria and Mike Kanellis couldn’t save this show from being a colossal fail.