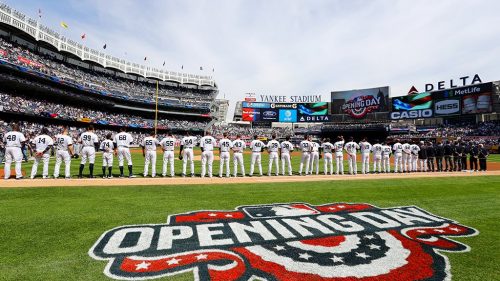 Opening Day in the Bronx Monday provided fans with the finest scenario of what this team is capable of.

Rocked one week earlier by the same Tampa Rays team, Michael Pineda was majestic on the hill for the Yanks.  He retired the first 20 batters he saw and the offense supported him handsomely in a 8-1 rout of the Rays.

Pineda took a no-hitter deep into the sixth before a two out double by Yankee killer Evan Longoria broke it up.  Pineda finished the afternoon going 7.2 innings and allowed just a run on two hits with 11 strikeouts and no walks.

Meanwhile the offense provided plenty of firepower.  Aaron Judge, Chase Headley and Starlin Castro homered off Tampa starter Alex Cobb, and the Yanks blew open what was a nail biter through seven innings with a five spot in the eighth.

♦ Merely five days ago I wrote on how maddeningly inconsistent Pineda has been in pinstripes.  Days like today when his talents are on display are why it’s so annoying.  He was masterful against the very same team that easily handled him one week ago.  Pineda retired the first 20 Rays, struck out 10 and had the Stadium firmly behind him like it was vintage Ron Guidry pitching.  It’s impractical anticipating greatness every fifth day, but it’s feasible to require much better than his last start.

♦ In fairness to Pineda, he’s been notorious for poor run support even when pitching well.  Pineda failed to pick up a win when allowing two runs or less in 14 of 16 starts last year— the most by a starting pitcher in American League history.   It also goes to show his irregularity, as he gave up at least five earned runs 12 times in 2016.

♦ This wasn’t exactly a light hitting team that Pineda sleighed Monday.  Tampa entered Monday riding the wave of a franchise-best 5-2 start to the season, with the fifth-most runs in baseball (33) while hitting .271.  Pineda held them to two hits on 25 at bats.

♦ Aaron Judge may not hit for a high batting average anytime soon, but man it’s fun to see him unleash that power.  Alex Cobb hung a curveball to him in the fourth and Judge made him pay with a towering homer, his second in as many days.

♦ I don’t care if the season’s been just eight days long— it’s time to start discussing Chase Headley as a good player on this team.  It’d be fraudulent to call myself a fan considering  I spent this past winter hoping he’d be dealt for almost anything, but I’ll be damned if he’s not charming his way into my good graces so far in April.  Headley homered for the second time and is hitting a cool .375 through seven games after going 2-for-3 today (along with two runs scored and the aforementioned homer). He’s also been very good defensively, making a diving stop to rob Derek Norris of a hit in the eighth inning when the outcome was still in doubt.

♦ Brett Gardner stole two bases in the eighth inning and is now 5-for-5 on the season, for the moment leading MLB.  His legs didn’t go to waste as he’d come in to score on a RBI double by Matt Holiday.

♦ Austin Romine went 0-for-4 at the plate and is 1-for-9 since taking over the injured Gary Sanchez. Romine and Ronald Torreyes were the only batters to go hitless.

♦ When the Yankees signed “slugger” Chris Carter on February 7th I rolled my eyes.  Even with team-friendly terms (one year and $3.5 million) I still hated the signing. It took all of one home opener plate appearance to be reminiscent of why.  New York had runners at the corners with one out in the bottom of the first with Carter at the plate and he whiffed because that’s what he does.  One Starlin Castro groundout later and the Yanks went back on the field scoreless.  Yes, Carter jacked 41 homers last year but also hit .222 and struck out 206 times. He’s never hit higher than .239 in his career.  You should be able to hit .240 by accident.  ***UPDATE***- forget everything I said, as Carter rocked a RBI triple off the wall in the eighth—his bat in the lineup is fine by me.

♦ If there’s one set of Yankee fans who may not have enjoyed how the Yankees last licks at the plate played out, it’s fantasy owners of Chapman.  He was in line for his first save opportunity of the season but that went away five runs in the eighth.

♦ Following a day off tomorrow the Yanks will go for their win their third win in a row Wednesday afternoon at 1:05 pm, which considering it’s a Wednesday is incredibly stupid. Luis Severino takes on Blake Snell.