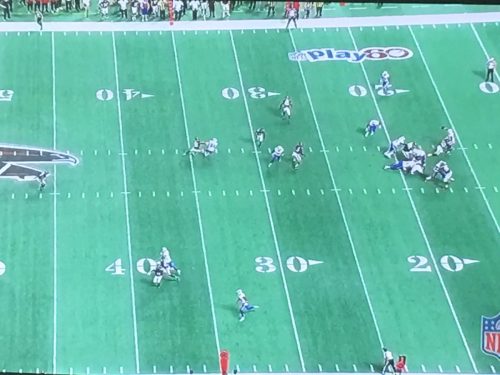 “Watching All-22 game film on Tuesday mornings is always a little less tedious after a Buffalo Bills victory.” I wrote that word-for-word after Buffalo beat Denver  two weeks ago and it goes double this week after Buffalo stunned Atlanta on the road Sunday, 23-17.  Watching the film wasn’t a choir, it was fun.

I may post on a few other things specifically based on what I saw later this week, particularly Jerry Hughes’ rejuvenation, Lorenzo Alexander’s never-ending motor and my concerns over Matt Milano having to to replace Ramon Humber—-but for now here are my three biggest takeaways from Sunday’s game following game film review.

TAYLOR’S POISE IS GROWING: We’re four weeks into the season and for me the biggest difference that stands this year compared to last is Tyrod Taylor missing open receivers with far less frequency. I vividly recall watching All-22 films last year and losing my mind at how often guys like Robert Woods, Marquis Goodwin and others got open and Taylor didn’t see, often because he’d feel the pocket caving and prematurely taking off running. I’m seeing a far more disciplined and patient Taylor in 2017 who’s more determined the throw the ball.  Last week after the Denver game I wrote glowingly of Taylor hanging in the pocket as collapsed–waiting til the last split second to find Jordan Matthews as he broke open for a big gain that led to a touchdown one play later.  In Atlanta I was equally impressed by Taylor as he took a first quarter snap from the Atlanta nine and dropped back to pass. No one was immediately open (shocker) but rather than take off scrambling he calmly waited for Matthews to come open on the left side of the end zone.  Taylor delivered a perfect ball and it went for a touchdown. These were plays Taylor flat-out didn’t make last season and now he’s done it two weeks in a row.  Taylor’s still not the most accurate passer and it would be nice to see him less conservative but there’s no denying his pocket poise has grown by leaps and bounds. That’s important, especially with a group of wide receivers that don’t get open quickly enough.  I also give credit to Dennison, who seems to be dialing up a ton of play action passes—something that clearly plays to Taylor’s strengths. I know many still crave Nathan Peterman but if you’re hating on Tyrod’s play after four games, there’s probably nothing he can do to please you. He’s played well.

Love the patience from Tyrod as he waits for Matthews to beat his guy in end zone instead of prematurely take off running. Growth. #Bills pic.twitter.com/F4bnV7qjn9

MILLS’ MISERABLE DAY: The Bills really need to find something better than Jordan Mills at right tackle. He hurts this offense badly.  On consecutive snaps to start the second half Mills directly cost the team.  On their first play Rick Dennison dialed up a back door swing pass to Lesean McCoy that would’ve ended up with him having Deion Jones to beat and not another defender within 30 yards. I’ll take those odds with Shady every time.  However, Mills literally whiffs on Brooks Reed and the linebacker sacks Taylor before he can swing it out to McCoy, ruining an opportunity for a huge play if not a score.  Mills misses a block on Keanu Neal the very next play to stuff a designed a Taylor run. I also saw multiple plays where Mills whiffs on a block and one or two plays where he pretty much just falls down. When Cordy Glenn gets back the Bills have to swing Dion Dawkins over to right tackle. Mills is terrible and it’s a matter of time before one his misses gets a key player like Taylor or McCoy hurt.

If Jordan Mills doesn’t miss his block to get Tyrod sacked on first play of 2nd half, Shady catches swing and probably scores a TD. #Bills pic.twitter.com/Q7tgmJ732M

WRIGHT SAVES THE DAY: The most underrated play of the game goes to Bills defensive back/special teams player Shareece Wright, who saved a touchdown by making a stop on Andre Roberts down the right sideline at the Buffalo 42 after Roberts returned a Stephen Hauschka kickoff 61 yards.  It was a huge play, as Buffalo lead 20-17 with 4:35 remaining at the time of Wright’s saving tackle. Three plays later Micah Hyde made a diving interception and 36-yard return that lead to three Buffalo points, forcing Atlanta to need a touchdown to win instead of a field goal.  Wright’s play was huge, even if it didn’t appear so at the time.