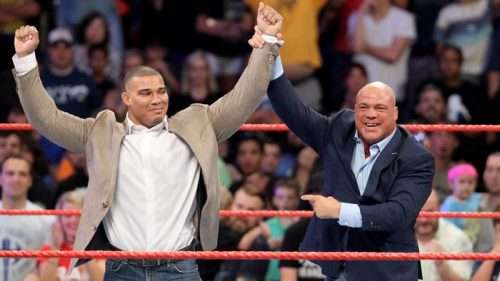 In a stunning turn of events, WWE today announced that Kurt Angle will take the place of Roman Reigns in the TLC main event match and A.J. Styles is replacing Bray Wyatt to battle Finn Balor at Sunday’s pay-per-view.  While WWE didn’t confirm specifics several reports indicate Reigns and Wyatt are off the card because of a viral meningitis scare running through the roster. Obviously it’s affected them (as well as Bo Dallas) that we know of. If that’s the case it wouldn’t be shocking if there’s more before Sunday.

MY TAKE: I understand fully WWE’s quandary with Reigns out to get a marquee name in what was supposed to be the Shield’s 5-on-3 reunion handicap match against the Miz, Sheamus/Cesaro, Kane and Braun Stroman.  Even with Reigns out, I think it’s a horrible plan returning Angle after 11 years like this on multiple levels. They include:

♦ Is it me or is WWE treating TLC with the same fervor they would Survivor Series or Royal Rumble?  I already thought this wasn’t a worth enough PPV to reunite the Shield to begin with (despite their career starting at TLC 2012) and I’m even more against Angle making his return in this spot.  While it’s good to know Angle’s physically ready and cleared to go, I’d have much more preferred a slow build towards his in-ring return culminating in one of the aforementioned shows or even Wrestlemania.

♦ What motivation does Angle have to end an 11-year retirement for this match specifically? He wasn’t physically assaulted by any of the opponents.  Hell he’s barely been verbally dressed down by anyone other than Miz.  They can’t even say he’s stepping in to fight for the honor of his “son” Jason Jordan. Nothing here about Angle stepping in fits.

♦ Lastly, of all types of matches is this the best and more importantly, safest way to insert Angle in a match involving tables, ladders and chairs?  He can only be protected so much without making it abnormally obvious.

As for Balor vs Styles, that may be an incredible match. However, knowing it’s a one-off deal leaves it hard to have any emotional investment in.  It’s like throwing Nakamura on the card Sunday to face Cesaro.  Sure, it’d be cool to see, but why would I care?

Everything about this PPV felt forced for me, starting with the Shield’s huge reunion feeling wasted on opposition no one really cares about. It got more absurd with Kane’s sudden and unexplained return on Raw this Monday to attack  them. Regardless of illness to the marquee star, throwing Angle in now verges on ridiculous.

WHAT I’D DO:  I know this wouldn’t be popular with fans, but if I were booking this I’d have Angle get attacked backstage early in the show mysteriously, off camera of course where we find him laid out and being ambulanced away.   It leads to Jason Jordan taking his place in the main event to avenge his father, with the announcers assuming Miz’s team gave Angle the beating. Of course, the crowd would wildly shit all over Jordan, which the WWE could use to finally turn him with actual real heat, as it’s soon after revealed he was Angle’s attacker, and it builds to a Survivor Series or Royal Rumble showdown with a properly marketed return of our American Olympic hero.  Sure, it sucks for Sunday but it’s for the greater good.

People don’t like bait and switch but given the circumstance, I think it works here.

Another option would’ve been scraping the Shield all together for now and having Styles (or even Balor) team with Gallows & Anderson to have “the Club” take their place.  A Club win sets up a Survivor Series match with a returning Shield.

Want to get real crazy? Get John Cena back for one night. How ironic would it be seeing him taking Reigns’ spot, a man he just lost to last month, fighting alongside his Shield brothers?

Lastly, perhaps Vince should’ve backed up the Brinks truck to book Brock Lesnar for this spot. You can use the Beast sill having beef with Braun Stroman as justification. Maybe that leads to a scathing Paul Heyman on Reigns promo down the line that kicks off the build towards their imminent Wrestlemania main event clash next spring.

Either Cena or Lesnar gives you the big-name WWE thinks clearly is lacking Sunday sans Reigns.

No matter how they get there, I hope Angle doesn’t have his in-ring return spoiled by actually performing in this match. I’ve patiently and eagerly waited to see him in the ring again, but I’m confident no one wanted it like this.