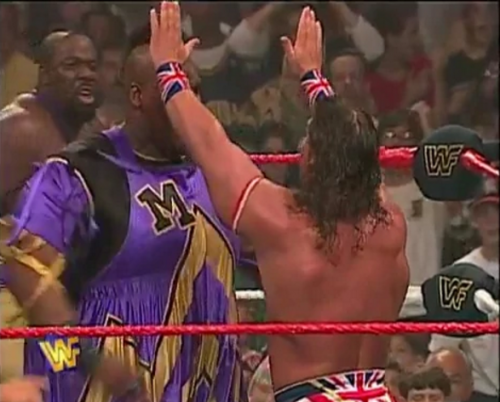 I started with episode 100 in my first recap, so this is the second time around with this—where we arrive in late Summer 1995.

Show opens with footage of WWF Superstars (the show—before every WWE wrestler was called a Superstar), showing Kama obliterate one of the Undertaker’s “Creatures of the Night.”  Kama is facing Taker in a Casket Match at Summerslam six nights after this episode airs

Undertaker promo in advance of match tonight with Tatanka, still a thing in the WWF 25 Raw episodes following my last recap.

Sir Mo and King Mabel (Men on a Mission) over Joe Handcock and Roy Raymond. Props if you remember either of them. Mabel nearly massacred Raymond with a powerslam.

Mabel grabs the mic post-match and does a forgettable promo that he’ll beat Diesel for the WWF championship.  He also challenges the team of Lex Luger and the British Bulldog to a tag team match later as a “tune-up.”

Backstage with Dean Shane (scratch him out) Douglas. His school/dean gimmick was educating fans with videos while generally degrading babyface wrestlers.  He’d praised Mabel and the Dean gave Mabel a grade of “NC” for “next champion.”

A promo to chat live with Vince McMahon at 10pm on AOL.

The 123 Kid pinned the Brooklyn Brawler even after being attacked by Brawler pre-match.

Promo of new Undertaker t-shirt on sale for $16,00 (plus $3.95 for shipping/handling) and includes a three-month subscription to WWF Magazine a box of Stridex.  I want it (the shirt, not Stridex)

A Goldust vignette in Hollywood. Goldust had premiered on Raw just one week prior.

Vince McMahon in the ring for an interview with defending WWF champ Diesel.

British Bulldog to the ring and says his partner (Lex Luger) has a medical emergency and can’t take on Men on a Mission. He asks Diesel to be his partner and the champ accepts.

Tag team main event ends in a no-contest when Bulldog turns on Diesel.  The Bulldog hit Diesel from behind as the champ was ready to square off with Mabel Bulldog slaps Diesel repleatedly in the face while he’s held.  Manager Jim Cornette comes in the ring and the segment ends with Bulldog hitting his running powerbomb and Mabel crushing Diesel with a Big E. Langston style big splash.

Jerry Lawler backstage with the heels and asks Cornette & Bulldog why he turned on Diesel. Both say they’re not ready to explain, yet.

That’s it from Worcester, Massachussetts.

“You know something, big boy—When the dust clears. When the sweat dries. The World Wrestling Federation will still be running on diesel power “ – Kevin Nash 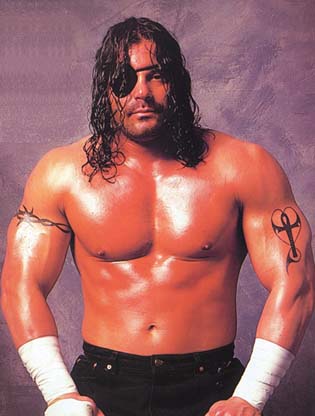 ♦ Two things really stuck with me after re-visiting this show.  One is literally not remembering who the hell Jean-Pierre LaFitte even was.  It took research to remind me he was part of “The Quebecers” and even held the tag team titles on three occasions beginning in 1993.  In ’95  he was repackaged as LaFitte and had a nice little feud with Bret Hart that year. Reading made me remember that but to this day I never knew he was released from WWF soon after a house show in Montreal after refusing to put over Diesel.  Shawn Michaels acknowledged in his book that the “The Kliq” buried him after that, although he never said McMahon fired him over it.

♦ The other character blurry to me was the Dean Douglas character, although I do have some remembrance of it.  Soon after this episode he’d go on to have a feud with Razor Ramon. He was gone from WWF by year’s end after just a handful of matches, including an 11-second run as Intercontinental champion (read about that here).

♦ There’s multiple mentions of Mike Tyson beating the shit out Peter McNeely in a boxing match over the weekend early in the show. It was evident very early Vince had Tyson in his sights to be part of the WWF down the road.

♦ I’m going to say the same thing I did in my last week recap (Episode 100)— I don’t recall Tatanka ever having any kind of significance as a heel in WWF, but evidently I’m quite wrong. He wrestled Lex Luger and the Undertaker 25 Raw episodes apart.

♦ Stridex was a huge WWF sponsor during this time.  The product placement is all over. In fact Summerslam was even titled “Stridex presents Summerslam.”

♦ Six nights from when this  aired, Razor Ramon would defeat Shawn Michaels in a ladder match at Summerslam for the Intercontinental title.

♦ Overall this was a lackluster show during a stretch not exciting for fans. For me “King” Mabel never felt like a main eventer nor did Kama yet both were in  Summerslam 1995’s biggest matches. There’s several others with decent to prominent roles I just didn’t give a shit about around this time: Bob Holly, The Smoking Guns, Phineas Godwinn, Hakushi and Savio Vega off the top of my head.