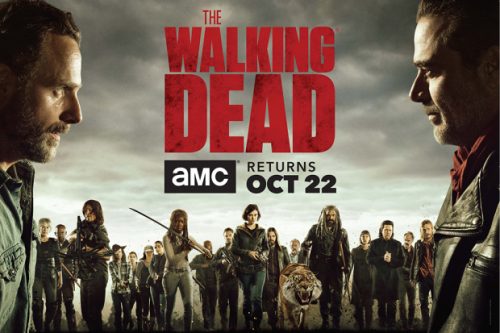 The Walking Dead, one of my favorite shows that I never actually watch will kick off its eighth season on Sunday night, October 22nd.

AMC made the announcement along with a pretty cool promotional poster of two guys whose identities are completely unbeknownst to me but clearly are not BFFs (editor’s note—it’s Rick and Negan) surrounded by a bunch of people who may or may not actually be dead?

I am aware the show suffered a tragedy on July 13th when stuntman John Bernecker died from injuries after suffering a fall on the set during filming.  Bernecker fell 30 feet onto a concrete floor after missing the safety pad. Production was paused for four days.

Anyway, I don’t watch The Walking Dead but my wife and many friends do—so enjoy the countdown to the newest season of dead people shenanigans.