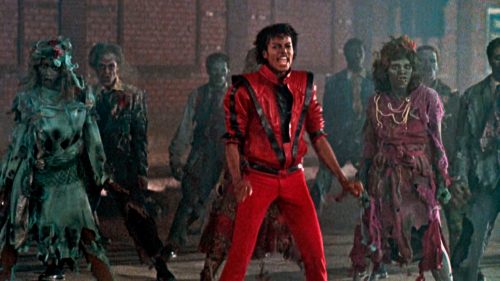 Let me provide some clarification before proceeding.  Even if a video for Michael Jackson’s “Thriller’ was never made, I’d still be a fan of the title track off the greatest album I’ve heard in my lifetime.

But I gotta keep things real.  “Thriller” is at the halfway point of my Top 100 countdown because of the video.  I take that back. It wasn’t just a video.  It was a landmark for music videos. If you’re old enough to remember or maybe even if you aren’t, it’s literally the most revolutionary video of all-time.

From Songfacts.com: “The video was a cultural milestone, introducing elaborate choreography, costumes and dialogue into the format. It also introduced the concept of the long-form music video, where a mini-movie was made for a song, then edited down for the short version. The long version of “Thriller” runs nearly 14 minutes, but had remarkable longevity, easily racking up over 100 million views when it showed up on YouTube. MTV usually ran the short version, which ran a little under five minutes but still contained about a minute of non-song content in a storyline that omits most of the movie the couple is watching at the beginning.”

The last of seven (!!!) top ten hits from Jackson’s historic album, “Thriller” is still a staple today on the music scene, especially around Halloween time.  It’s one of the few songs on the countdown I openly admitting to having more because of what I saw on TV than hearing on the radio.

Besides, I’m confident this won’t be the last time we hear from Jackson in this little journey.

Chart Success: It peaked at number-four on the Billboard Hot 100 and has been on the charts on and off several times through the years, as recently as 2015.  It finished 78th on the 1984 year-end Billboard Hot 100.

Great Lyrics: Jackson was so brilliant that his words were believable, despite being quite possibly the most harmless looking guy on the planet.

Fun Fact: “Thriller” wasn’t written by Jackson. That honor belongs to Rod Templeton.  Previous to this track Templeton had success penning previous tunes for Jackson, including “Rock With You” and “Off The Wall.”