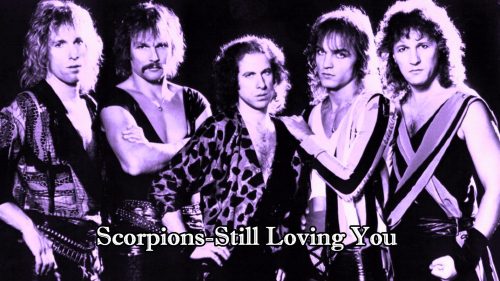 As I write the first few sentences for this entry, I couldn’t tell you if Still Loving You by the Scorpions actually spent a day on the Billboard charts.  Frankly, I don’t give a shit either.

In fact, it leads to one of my bigger musical hot takes, which is this—- Still Loving You by the Scorpions is the single-most underrated power ballad of the 1980s.

We live in a world where when people reminisce on monster ballads from the glorious 80s we think Warrant, Winger, Whitesnake, White Lion or some other shit from a band that starts with a W.  While we’re at it, may as well toss in Bon Jovi, Poison and Motley Crue.

None of it matters. No anthem from the era matches the frantic begging and fawning to retrieve lost love that the Scorpions bring with this song.   Picture the person of your dreams. Now imagine that you were with them—they were devotedly yours but at some point you fucked up so bad they bolted and you’d do anything—- and I mean anything in the world to win them back.

You’d start by penning this song.

Still loving you is near-seven minutes of tension-filled, slow building  pleading by band lead singer Klaus Meine before eventually reaching the massively climatic final chorus that makes this the preeminent power ballad it is.  Meine’s vocals power directly through the stop sign while the bluesy guitar power chords help hammer home the message that the dude is sorry and really (really) wants his lover back.

Ironically I wasn’t a big Scorpions fan as a whole.  For me, Rock You Like A Hurricane and Winds of Change, while bigger and more well-known are clown songs by comparison.  Still Loving You is the song you need to have in your back pocket if your significant other’s ready to cut the cord after you blew it.  For that reason and I’m sure others, this song is the Scorpions crowning musical achievement.

Chart Success:  Turns out Still Loving You did land on the Billboard Hot 100, but barely. It only reached No. 64, by a mile the lowest peaked selection of any song on this countdown.  It did reach number-three in other countries quite apparently more appreciative of a classic ballad than the United States— Belgium, France and Switzerland.

Great Lyrics:  The slow build, friction and release in Still Loving You is incredible.

“If we’d go again
All the way from the start
I would try to change
The things that killed our love
Your pride has built a wall, so strong
That I can’t get through
Is there really no chance
To start once again
I’m loving you”

Fun Facts: In an interview with Songfacts.com, guitarist Rudolph Schenker revealed that it took six years to come up with the song.  “I came up with the composition’s melody and everything. It took about six years of trying to get the song somehow on the album. Matthias Jabs came in with the guitar part, and the feeling was immediately right, so Klaus (Meine) noticed it was right. Therefore, he wanted to write something very special. He told me about how one day he went out into the fields in the snow, and it was then that he came up with the lyrics. He came back home and threw them down, and here we are.”

It turned out to be the fourth-biggest “hit” for the band that was far more acclaimed critically than commercially. Winds of Change reached number-four, while Rock You Like A Hurricane only hit No. 25 and Send Me An Angel (that’s actually their song?) stalled at No. 44.