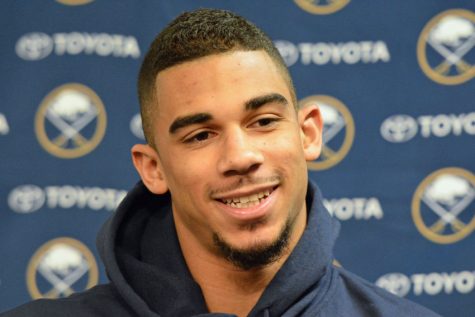 Just like last season, which happens when your team is trash, there were rumors of potentially several Buffalo Sabres players being moved at Monday’s deadline.

For a second straight season, perhaps the organization and most certainly the fans were left wanting more.

As everyone expected, Evander Kane was dealt—shipped off to San Jose Sharks for conditional picks in the first and fourth rounds of the 2019 NHL Draft, and 24-year old winger Dan O’Regan, who (surprise surprise) is a former teammate of Buffalo Sabres star player Jack Eichel.

The “conditional first” round pick in 2019 is far more likely to become a second-rounder, as the Sabres only get a first-rounder if Kane re-signs with San Jose this summer.

The compensation, or lack thereof makes you wonder if general manager Jason Botterill played chicken a little too long by holding on to Kane until the last minute. It’s hard not to think his value would’ve been significantly higher if he were dealt weeks if not months ago, as even the delusional Sabres knew this was  a lost season very early on and Kane wasn’t going to ever re-sign.  Or maybe, in fact more than maybe teams weren’t enamored with Kane’s personality which has rubbed teammates the wrong way in both Buffalo and Winnipeg before that.

No matter what the reasoning, the haul for Kane feels underwhelming to me.

Meanwhile, guys like Benoit Pouliot, Robin Lehner, Chad Johnson and Josh Gorges, all remained.  My first thought was for the love of God, Botterill can’t even give away this collection of mediocrity but in fairness to the GM, you can make a case that he didn’t want to ship off several “meh” vets as it would force the recall of multiple kids from Rochester, and those kids are probably better off staying in Rochester for the rest of the season.

Last year Tim Murray didn’t do shit at the trade deadline. Given the return for Kane, it almost feels like the same.  Whatever.