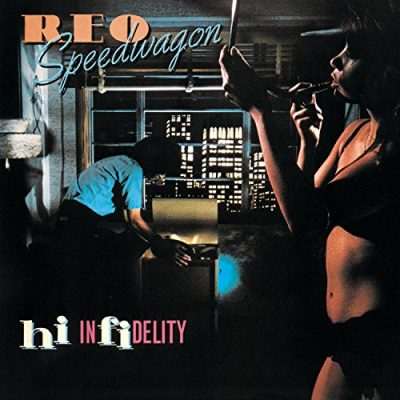 Album MVP: “Keep On Loving You”

Why I Loved It: REO Speedwagon was always unapologetically manufactured rock and roll completely produced for the mainstream masses, yet their tunes often had a genuine sense of emotion. There weren’t a lot of albums I remember having as a 10-11 year old but I’m positive I had this one.  For my money “Keep On Loving You” is and always will be one of AOR all-time great tunes It came in at No. 70 on my Favorite 100 Songs of the 80’s Countdown earlier this year. “Take It On The Run” is an underrated AOR classic. “Don’t Let Him Go” is another really strong track.

REO Speedwagon, along with groups like Styx and Foreigner perfectly bridged the gap  between classic rock and the eventual onslaught of new wave and hair-metal genres.  I think Hi Infidelity is a must-have for any 80’s rock collection.

Commercial Success: By the time late 1980 rolled around and this was released it was already REO’s ninth studio album.  This one enjoyed tremendous commercial success, rising all the way to number-one on the Billboard Top 200, staying there for six weeks and has sold more than 10 million copies worldwide. Off Hi Infidelity came their first Billboard Hot 100 number-one hit, “Keep On Loving You”, which would go on to finish 1981 ranked 10th on the year-end Billboard Hot 100.  “Take It On The Run” climbed all the way to number five on the Billboard Hot 100 while “In Your Letter” gave the band three Top 20 hits on the album. “Don’t Let Him Go” reached 11 on the Mainstream Rock chart and “Tough Guys” made it as a far No. 25.

Fun Fact: From Songfacts.com: Their Hi Infidelity album was #1 for six weeks in America in the summer of 1981. This earned them a lot of airplay when MTV launched on August 1, but the band’s videos were low budget performance clips. In the ensuing years, other acts with more high concept videos began to dominate MTV.

“I always thought it was cool,” Kevin Cronin told Songfacts. “When people came to concerts back in those days, there were no video screens, so if somebody was up in front they could really see the band and really see what was going on, but the majority of people in an arena are so far away that you can barely even see what the band looks like. Well, this was a way to come into people’s living rooms and connect with them more. To me, that’s kind of what it’s all about: finding ways to connect with people through the music. I always thought MTV was pretty cool.”

Many of their hits were inspired by the ups and downs of the band members’ relationships. The album title Hi Infidelity is a nod to the cheating that was going on: guitarist Gary Richrath wrote “Take It On The Run” about the problems he was having with his girlfriend, Debbie, and he wrote “In Your Letter” about a Dear John letter the band’s keyboard player, Neal Doughty, got from his wife. Kevin Cronin wrote “Keep On Loving You” after learning that his wife, Denise, had cheated on them before they were married.