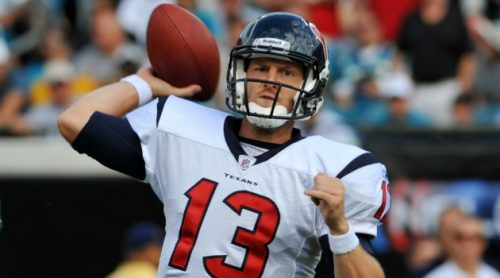 The team announced the signing of Yates and according to multiple reports the deal is for one year.

Yates (29) was with the Miami last year.  Prior to that, the former fifth-round pick in 2011 spent his career with the Houston Texans sans one game with Atlanta in 2014.

My Take: It’s not a bad signing in that there’s literally no risk and more importantly won’t prohibit the team from selecting drafting a quarterback at any point of the draft (should they choose). I don’t think Yates is particularly good and wouldn’t feel confident should he be the No. 2 if something happened to Taylor, but I see where Buffalo is going with this. Best case he has a great camp and wins the backup job if Jones stumbles and isn’t deemed ready.  Worst case he’s an insurance policy for the summer and a roster casualty in late August. No harm, no foul. For me this move reinforces my belief the team is going to draft a quarterback sometime between the third and sixth round— a theory I would’ve abandoned if the team had signed a more noteworthy name to backup Taylor like Colin Kaepernick or Ryan Fitzpatrick.

I’m not unearthing any stone with this statement, but I’d place the same odds Yates enters Week one with the No. 2 job that I would him not being on the roster at all.