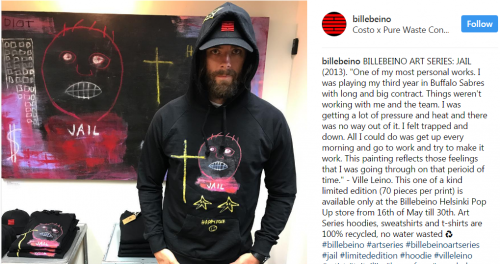 On his Instagram today Leino published for sale a hooded sweatshirt called “Jail” that also contains the words greed, jail and idiot. Apparently Leino is the owner or at least involved with an apparel company called Billebeino Clothing and Accessories.

“One of my most personal works. I was playing my third year in Buffalo Sabres with long and big contract. Things weren’t working with me and the team. I was getting a lot of pressure and heat and there was no way out of it. I felt trapped and down. All I could do was get up every morning and go to work and try to make it work. This painting reflects those feelings that I was going through on that perioid of time.”

MoranAlytics Take:  GTFOH.  Must be tough feeling like you’re in jail, although being bought out and paid $7.33 million to not play hockey anymore for the Buffalo Sabres was a nice parting gift.  Signed to a six-year deal paying him $27 million, Leino mustered all of two goals over his final 66 games with the team, including none in 58 games in 2013-14.  How on God’s green earth do you play 58 games over a season and not score at least once, even if by pure accident?

Musta been all the heat and pressure.  What a piece of shit.  Even so, I may still buy the hoodie.