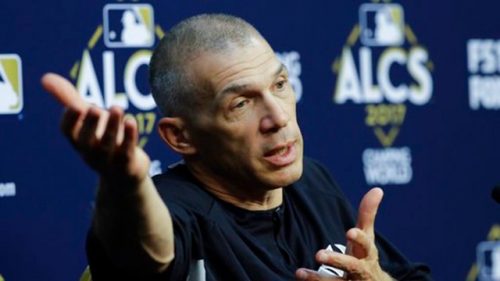 Considering how tantalizingly close the New York Yankees came to reaching the World Series, it somewhat took me back when the team today announced it wouldn’t renew Joe Girardi’s contract and that he’s out as manager. While Girardi not returning isn’t shocking, the fact the decision wasn’t mutual is unanticipated to say the least, to me anyway.

I have some thoughts on the decision and Joe…

♦ If there’s one thing that bothers me about my fellow Yankee fans, it’s how implausibly spoiled and impractical to please so many are. It’s outlandish how maligned Girardi was as manager when you realize over his 10 years as pinstripes leader the Yanks were exactly 200 games over .500 (910-710) and won more times than anyone in MLB during the that span.  Under Girardi they won a World Series in 2009, fell one game short of returning this year and won the division three times.  New York never won fewer than 84 games with him as skipper, pretty freegin’ remarkable considering the clusterfuck of bad contracts and talent well past their prime over the four years before this latest youth-inspired run. If I don’t type another word I’ve said more than enough for Girardi to get far more respect and esteem than he’s procured over this past decade.

♦ As soon as the New York recorded the final out to complete the series comeback victory over Cleveland in the ALDS, I was  overcome with gladness for Girardi. I would’ve hated to see his New York managerial career end with New York losing the series because he dropped the ball and didn’t challenge a replay in game two. He screwed up, he knows he screwed up, he wore it on his sleeve and it’s fantastic for it to not be his lasting memory.

♦ As stated at the top, I’m a bit staggered Girardi not returning isn’t mutual and that’s it’s exclusively Cashman’s doing after his recommendation to ownership that it’s time to move on. It makes you think that maybe the pair were never as chummy at it seemed through the years, or the past few at the very least. It’s no secret Girardi is far more an emotional roller coaster than serene. It’s feasible that Girardi’s temperament was a factor, maybe a signficiant one in Cashman’s resolve to switch gears.

♦ While it turns out Girardi desired a return, it didn’t feel that way during the late part of the season and especially the playoffs, where he truly looked downright burned out. My money was on Girardi saying it was time for him to take a break and spend more time at home with his family.

♦ So we’re clear, I’m not saying Cashman’s mistaken in his line of thinking.  Maybe a manager less demonstrative and more cerebral is a better fit for a roster unmistakably dominated by developing youngsters.  Girardi did a good job of massaging veteran egos who spent plenty of time on the bench during the 2017 stretch in the name of cohesiveness; guys like Chase Headley, Jacoby Ellsbury and Matt Holliday.  As we move forward it’s about finding a guy to bring out the best in Aaron Judge, Gary Sanchez, Greg Bird, Gleyber Torres, Clint Frazier, Chance Adams, Justus Sheffield and others.

♦ It’s easily conceivable that guy is already in the Yankees system.  Within seconds of Girardi’s exodus I saw my Twitter and Facebook timelines submerged with marquee names like Don Mattingly, Dusty Baker, John Farrell and even Willie Randolph, who hasn’t been a MLB coach since 2011 and last managed the New York Mets from 2005-08.  Instead, I wouldn’t be stunned to see the gig come down to a promotion for either current Yankee bench coach Rob Thomson or Triple-A Scranton manager Al Pedrique, who has managed many of these young Yankee players.  I suppose first base coach Tony Pena could be a dark horse candidate with his past managerial experience with the Kansas City Royals, but I see this being an in-house race between Thompson and Pedrique.

This marks the second time Girardi has to feel screwed over. He doesn’t get a new contract after the Yanks nearly reach the World Series this year and previously was fired by the Marlins after being named Manager of the Year in 2006.  That shit sucks, man.

♦ I’m not the least bit naïve to Girardi’s shortcomings as manager, which is why some Yankee fans aren’t holding vigils following his exile today. His management of the bullpen was often infuriating, to the point he deservedly earned the nickname “Binder Joe.”  He’s been roasted for not providing enough of the human element to his job.  He’s far from the perfect manager.

♦ At the end of the day I simply want his time with the club to be reminisced affectionately. I’d surmise there’s no tougher managerial job in all of sports than being the skipper of the Yankees, where each home game has such a barrage of questions that it probably feels like Super Bowl media day. Not only did Girardi handle the invasive New York press but did so well. This is a club with only two managers over the past 22 years. That’s incredible especially in this day and age. I think his relationship with the organization had run its course and it’s time to get a fresh voice in the clubhouse. In the years to come may Joe be seen in the most positive manner by Yankee fans and that someday he returns to the occasional Old Timers games and special events with the same love and adoration his predecessor Joe Torre has enjoyed.