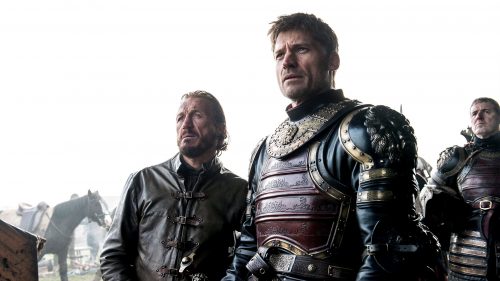 Don’t ask me what I was thinking over the past six years because I can’t provide an acceptable excuse, but over this past month I binge-watched the entire six seasons of Game of Thrones on HBO.  There’s not many things on television or film that get past me, considering I haven’t much of a life, but I’m humiliated to have let watching this show slide for six freegin’ years. It is incredible! For those bastard souls out there that’ve yet to watch (like myself until recently), I won’t spoil any specifics here—plus I plan on writing extensively about this show in the coming days.  However, I must say this— based on the first six seasons, this show has catapulted The Sopranos as my favorite TV drama series of all-time.  I’m not sure I’ve ever seen a show with 60 episodes that literally feels like you can’t miss even one.  Season 7 premieres on July 16th.  Can’t wait!

♦ Aaron Judge ain’t playing around.  The rookie New York Yankees outfielder hit a 495-foot home run (the longest in MLB this year) that cleared the left field bleachers Sunday—at Yankee Stadium! He also hit a second homer—a mere 402 foot dinger in going 4-for-4 at the plate. In total he put three baseballs out of the park and drove in six over the weekend against a helpless Oriole pitching staff. He’s now leading the American League in batting average (.345), home runs (21) and RBI (47) which for those mathematically challenged, puts him on pace to win the Triple Crown as a rookie.  For good measure he’s also leading the AL in runs scored (54).  Shit, he’d probably lead in ERA and WHIP if he felt like pitching. This kid is ridiculous.  Forget Rookie of the Year—he may already be the best hitter in baseball not named Mike Trout.  Sorry, Bryce Harper fans.

♦  Wrestling has become literally unwatchable for me over the past few weeks. I’m sure for many of you that’s something you’ve been saying your entire adult life if not beforehand, but for me it’s a big deal. I’m 46-years young and have watched WWF/WWE religously since I can remember. I mean, you realize I have an entire section of this blog designed for WWE, right?  Lately though, I just can’t.  Simply put, there’s not enough stars I care about and it feels like the ones that are big enough stars are being used wrong. Shinsuke Nakamura should be a special attraction almost like Brock Lesnar, not wrestling Dolph Ziggler a zillion consecutive weeks.  I didn’t watch one minute of the latest PPV and in fact, without cheating I can’t even remember the name of the show I missed. I haven’t watched Raw or Smackdown in two weeks either. To be fair my recent Game of Thrones binge is partially responsible for missing but still, I simply don’t skip watching wrestling shows.  I don’t know—maybe I’ll give Raw and Smackdown a clean slate these next two days and my interest will spark again, but based on these past few months I’m not holding my breath anymore. Sad!