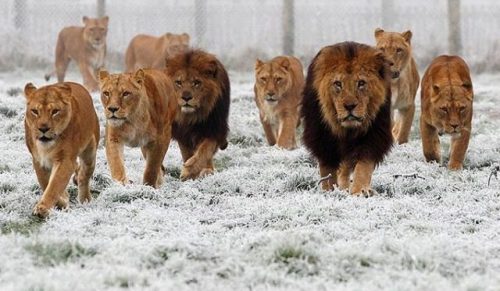 It’s not possible to be more wrong about the Buffalo Bills than I’ve been this season and particularly this morning. I was too lazy to compose a prediction post for this blog but allow me to share the complete nonsense I wrote for buddies on Facebook:

“My Unpopular Prediction That May Bite Me in 4 Hours: I think the Raiders win today in fairly lopsided fashion. At some point injuries are too much to overcome, especially on a developing team. Jordan Poyer (has been great this year) and EJ Gaines are both out… Trae Elston and Shareece Wright are both starting in the secondary against Cooper/Crabtree/Carr. Sooner or later these injuries are going to catch up to a decent team, and I think today’s that day. Plus, I think today’s the time for Buffalo to fall back down to earth a little. This is almost free money for you from your bookie…. Raiders 31, Bills 16.”

Coming back to bite me was a colossal understatement and I’ll understand should you never seek my financial investment advice. The Elston/Wright thing mattered on the first drive and not again after, and the Bills defense yet again played like a pride of lions while having equal success on offense in a 34-14 Bills shellacking to  improve to 5-2 after seven games. This season is getting is fun.

♦ I’m not certain what it is about this team, but it’s growing harder to not be a believer, or is it “Billiever”? On one hand it’s easy to let skepticism linger, even at 5-2.  After all, the last time Buffalo were 5-2 after seven starts (2011) they proceeded to lose seven straight and disappointingly collapse from playoff contention. But there’s just something about this 2017 Buffalo Bills that feels different than previous encouraging starts that teased us before their limitations came to the surface and yanked all hope away. Maybe I’m mistaken but with the exception of the New York Jets opener the Bills have been inferior in overall talent each week yet it hasn’t mattered. They’ve beaten teams that in my opinion were more talented—Denver, Atlanta, Tampa and now Oakland because they were hungrier and better prepared to play.  It’s still too early to use the term “special”, but Buffalo has really been something to see.

♦ If Sean McDermott isn’t NFL Coach of the Year as we approach the midpoint of the season he damn well better profoundly be in the conversation.  This team without fail has been ready to play every week and literally are a few better executed plays away from being undefeated. Perhaps “addicted to the process” really is more than a cool Twitter catchphrase.

♦ Case in point about McDermott and his team-first mentality—Sunday produced my favorite play of the 2017 season.  Facing second down and 20 Tyrod Taylor completed a short pass over the middle of the field to Brandon Tate.  Better known as a special teamer, Tate broke several tackles and transformed a short gain into a first down before being shoved out of bounds on the Buffalo sideline.  Before you could blink an eye 15-20 guys were there jumping around like a mob scene, leading most (including TV guys) into thinking a brawl was brewing.  Nope —it was Tate’s teammates assailing him with excitement and rejoicing like Tate just hit the Mega Millions.  That’s culture right there.  That’s unselfishness. That’s fervor and its passion. The Bills are playing with all that and more. If you think that has nothing to do with this team being 5-2 you’d be wrong.  I’m learning this stuff matters.

♦ Another case in point — I can’t say enough about the heart of Bills tight end Logan Thomas playing this week after fatally losing his daughter on Tuesday. He has more courage than most could ever have, and it wasn’t lost on his teammates.  Thomas, who caught a pass Sunday was presented with a game ball. I can only imagine what was going through his mind, but my thoughts continue to be with him and his family.

Logan Thomas got the game ball for the Bills today. Emotional week for him after losing his daughter.

♦ It has to matter because on paper I don’t see a team that’s meant to be 5-2. Jordan Poyer and EJ Gaines, two guys in their own right were castoff starters on other teams in 2016 were injured and out for Buffalo, replaced by Trae Elston and Shareece Wright. Elston had an interception and led the team in tackles.  Wright helped keep Crabtree and Cooper from having big afternoons.  Andre Holmes is led the team in receiving yards and scored a touchdown. Matt Milano was in a mood to cause a fumble and recover another one to score a defensive touchdown.. Leonard Johnson cause a turnover.  Cedric Thornton, Ryan Davis and Eddie Yarbrough were pressuring David Carr. I mean, who the freegin’ hell are these guys? That must be the sentiment around the league. These no-names were largely responsible for this latest Bills win and it’s been that way all season.  It makes you think if McDermott can get this out of guys perceived as league castoffs and rejects, imagine what he’ll be able to do with a talent uptick in the next few years.

♦ If McDermott could pen his own script each Sunday, I presume it’d star Lesean McCoy in a role as the best player on the field.  You know who was the best player on the field Sunday? Lesean McCoy, that’s who. Shady ran for a season-high 151 yards, including an icing-on-the-cake 48 yard touchdown in the game’s waning moments. It was McCoy’s first 100 yard rushing game since the New York Jets opener and ended a streak of five straight failing to hit the century mark. He also added six receptions although they only totaled 22 yards. It’s encouraging that McCoy has looked as healthy running after seven games as he did his first snap of the preseason. Also significant has been his remorseless confidence in the locker room and press conferences, which seems to have been contagious.

♦ You know who wasn’t the best football player on the field? Khalil Mack, that’s who.  The linebacker who in my opinion is the best defensive player in the NFL produced one mega pile of shit Sunday, mainly against Cordy Glenn and gasp….. Jordan Mills.   Mack had but two tackles and wasn’t even close to a factor getting after Tyrod Taylor. I don’t think anyone saw a lifeless Mack effort coming in his return to Western New York, especially after Von Miller, perhaps Mack’s one true peer had six tackles and a sack against Buffalo earlier this season.

♦ It’s never easy to admit you’re wrong (even tho I literally already did at the top of this column), especially when it hurts doing so. But in hindsight I jumped the gun when overreacting to the Bills losing Mike Gillislee to the Patriots this offseason. Don’t get me wrong here—I still think Doug Whaley gaffed by not increasing his tender to a second-rounder for another $900K to lock him up for 2017.  And I don’t care how lackluster his New England numbers have been this year; he’s much better than Mike Tolbert (who admittedly hasn’t been bad) and were Gillislee in Buffalo I’d bet his stats would be better.  But where I’m wrong is that the seemingly meaningless fifth-round pick the Bills received for losing Touchdown Mike turned out to be this

The #Bills selected Matt Milano with the draft pick they received from the #Patriots for Mike Gillislee.

This rookie kid has been a damn Godsend since Ramon Humber broke his thumb. I distinctly recall a point this summer where it was being debated if Milano would even make the 53-man roster, and now I can’t imagine where this defense would be without him the past two weeks. In a 7-7 game and less than a minute before halftime, Bills defender Leonard Johnson hit Washington and the football popped in the air and into the arms of Milano, who raced 40 yards for the touchdown after being in position to make the play. Then early in the third quarter on a Bills punt Milano forced a fumble Buffalo recovered that led to a field goal. That’s 10 points Milano was directly responsible for. Last week he had a big interception in the victory over Tampa Bay. This kid has been amazing.

♦ Johnson deserves his own little bullet here for the hit on Washington that led to Milano’s touchdown fumble return. It very well may have been the play of the game. For such an unheralded guy on the roster Johnson’s been pretty good in recent extensive action. 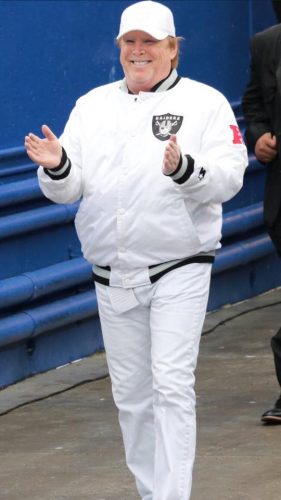 ♦ Micah Hyde…. 2017 Buffalo Bills Pro Bowler. He leads the NFL with five interceptions. More importantly, nobody gets behind him. He also had a key tackle to stall an Oakland first half drive.

♦ Want to know how good Tre’Davious White was today? Here’s a Pro Football Focus graphic and also consider the Raiders posses two of the best receivers in the NFL in Amari Cooper and Micheal Crabtree.  In fact, Cooper was AWOL until this contest was decided.  Hand this kid the Defensive Rookie of the Year trophy now. 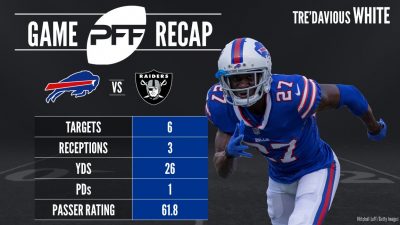 ♦ Zay Jones had three early catches for 32 yards. He didn’t do anything the rest of the game, but maybe that early success against the Raiders will jump start the second half of his rookie campaign.

♦ Sticking with guys who’ve been largely lambasted by fans and the media, right guard Vlad Ducasse seemed to have a very good afternoon. The entire offensive line did great at providing Taylor time to throw the football.

♦ I’ve saved the best for last and on this day that best is Taylor.  This was arguably his best game of the season and hopefully the type of day that’ll make the portion of the fan base desiring Nathan Peterman go away for the next nine weeks. Taylor completed 20-of-27 passes for 165 yards for a touchdown without a turnover.  I also noticed a patience and poise in the pocket that frankly has lacked during his 2.5 years here. He didn’t take off running prematurely. He didn’t preemptively deliver footballs after prematurely feeling pressure.  Perhaps most impressively is he used the threat of his legs to extend plays instead of just running away from the first sign of danger. Taylor only has eight touchdown passes in seven games, but also only has two interceptions. He’s been turnover-free in five of Buffalo’s seven games and with a team heavily reliant on a defense that takes the ball away, that matters a ton.

The Bills being +14 in the turnover battle this year is as much about Tyrod protecting the football as it is the Buffalo defense taking it away.

I don’t know, man— Tyrod’s let us down before when we’ve thought he’s turn the corner but maybe, just maybe it’s the end of Dr. Jeckyll and Mr. Hyde era and we’ll more consistently see the Tyrod of the past two weeks.

I like that Tyrod.  Buffalo can make a legit playoff push with that Tyrod.

It truly was a Sunday Funday for Bills fans.