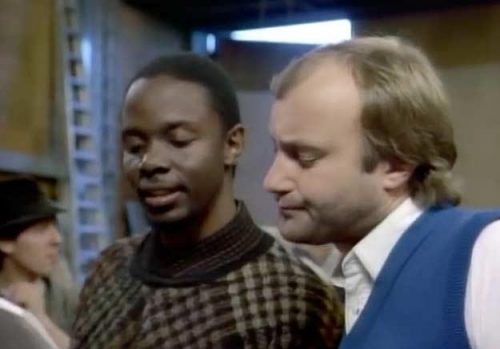 Whether you wanted it that way or not, few things in the mid-80s were bigger than Phil Collins.  Between his work with Genesis and a solo career beginning to flourish, Collins was at the forefront of pop/rock music during this era.

Collins’ legend grew in 1984 when he was asked to produce Philip Bailey’s (of Earth, Wind and Fire fame) debut solo album.  Near the end of the recording sessions Bailey pointed out the two hadn’t yet collaborated on anything. One night they had a jam session and came up with the meat and potatoes of Easy Lover, recording the parts they’d done in order not to forget it.

Far and away it became Bailey’s biggest hit (one of Collins’ as well)—and also my favorite duet from the 80’s.

In a 2016 interview with Rolling Stone, Collins spoke of how proud he was of the collaboration.  “That song doesn’t sound like any particular era,” he said. ” It’s just fantastic. The hip-hop brigade fell in love with me after “Easy Lover. They were like….Where’d that come from? That ain’t black music and that ain’t white music. That’s kind of an interesting color of beige.”

He wasn’t lying.  1984 is arguably the greatest year for pop music ever, and Easy Lover was among the upper echelon. It’s a delicious slice of 80’s pop cheese pie, an ultra-enjoyable song sure to be entrenched deep into your brain forever after just a few listens. That was certainly the case for me. It’s one of those tunes where both artists carry their weight equally, which brings me to another point—- Bailey’s role in this classic should never be understated. The harmonies in Easy Lover are flawless, and it’s because few artists in the world could harmonize with Bailey. It’s easy to forget and only mention Collins when discussing Easy Lover, but doing so is a terrible disservice to the talent and contribution of Bailey.

Don’t sleep on the wonderful and intentionally goofiness of the music video either.  During this time the MTV era was mostly dominated by groups like Duran Duran, Wham and Culture Club, but I’ll be damned if I didn’t see Easy Lover played around the clock.

Chart Success:  Easy Lover narrowly missed reaching the top of the charts, settling for a peak position of number-two on the Billboard Hot 100. Only Foreigner’s I Want To Know What Love Is prevented Easy Lover from reaching number one.  It stayed on the charts for 23 weeks and finished 1985 ranked 12th on the year-end Billboard Hot 100.

Great Lyrics:  Let’s not worry about the cheesy lyrics, but instead just throw the track on and enjoy the pleasing harmonies.

Fun Facts:  Easy Lover won the 1985 MTV Award for Best Overall Performance in a Music Video.  It was also nominated for a Grammy (Best Pop Performance by a Duo or Group With Vocals), but lost out to USA for Africa’s “We Are The World.”