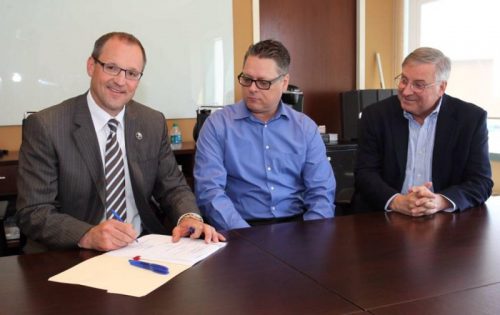 At approximately 10am this morning and seemingly out of nowhere the Buffalo Sabres sent out a Tweet, announcing the organization has fired both Head Coach Dan Blysma and General Manager Tim Murray.

“After reviewing the past season and looking to the future of the organization, Kim and I have decided to relieve General Manager Tim Murray and Head Coach Dan Blysma of their duties. We want to thank Tim and Dan for their hard work and efforts they have put in during their tenures with the club. We wish them luck. We have begun the process to fill these positions immediately.”

Who knows if it’s related, but this comes less than 24 hours following a report by WGR’s Paul Hamilton that stated Jack Eichel had no interest in signing a contract extension over the summer if Blysma remained as head coach.  This instantaneously prompted his agent to shoot down the rumor and Eichel doing an interview with The Buffalo News himself to deny any disconnect between he and coach.

Former WGR radio host Kevin Sylvester tweets hearing that the Pegula decision to fire Blysma and Murray was made before Murray’s meeting with the owner in Florida on Wednesday.

For what it’s worth: I’m told the decision to fire Murray and Bylsma was made before the meeting with the Pegulas yesterday.

Regardless of animosity between the Sabres best player and head coach the biggest factor leading today was the Sabres lack of progress this past season and their 33-37-12 record—finishing in the basement of the Atlantic Division and 15th in the Eastern Conference.

Bucky Gleason of the Buffalo News hears Murray didn’t have the answers the Pegula’s were looking for when asked how the team should proceed.

I’m told Pegulas were looking for answers on how to proceed, and Murray didnt have many, or any. Bylsma was collateral damage swept w/GMTM

MY TAKE:  Firing Murray, at least right now is a head scratcher for me.  At worst I presumed he’d have this summer and 2017-18 season to get things turned around.  Murray was lauded for the Ryan O’Reilly and Evander Kane deals—his best moments as GM but conversely did a shameful job on the blue line between trading away Brayden McNabb and Mark Psysk for substandard returns and overall lack of talent at the position after Rasmus Ristolainen.

Most meaningful to Murray’s detriment, he’s likely fell on his sword because he’s backed Blysma as coach.  You don’t need to be Hamilton, Bob McKenzie or Pierre LeBrun to know Sabres players generally loathed Blysma—fine if the team was winning—they weren’t.  Murray himself took shots at Blysma during his recent press conference—suggesting Blysma needed to employ more resources getting to know his players and coaching them instead of exclusively his system.

Meanwhile, teams with fellow young franchise players Toronto (Austin Matthews) and Edmonton (Connor McDavid) are in the playoffs.  The Sabres are no closer today than they were 12 months ago.

I’m sure that didn’t sit well with Pegula.

Blysma getting canned is less of a surprise. While Eichel is transforming into a superstar it’s hard to imagine he woudn’t be regardless of the coach.  Too many young players on the roster stalled if not flat-out regressed under Blysma’s tenure—guys like Zegmus Girgensons, Marcus Foligno and McCabe among others.  Sam Reinhart didn’t take a step forward in 2016-17 after a promising rookie season.

Mix Blysma’s 68-73-23 record over two seasons with the overall sentiment that many players tuned out his system-first message, and it’s not shocking Blysma finds himself unemployed today.

On the bright side, both will still get paid for the next three years to not work in Buffalo.  That Pegula guy is so charitable.

One thing has surely been established if it wasn’t already—Pegula AKA Mr. Trigger Finger doesn’t dick around when it comes ridding himself of employees.

Jay Skurski of the Buffalo News pointed out a great stat

Since buying the #Sabres on 2/3/11 and later the #Bills, the Pegulas have fired 5 coaches (and had one quit), 2 GMs and 2 team presidents.

Between the Bills and Sabres, at least one of Pegula’s teams better turn things around over the next 12-24 months in a big way, because Pegula is on the fast track towards being one of the worst owners in all of sports.  I don’t mean worst as in disloyal to Buffalo and its fans or as a jerk of person—I’m talking lousy personnel decisions that keep his teams mired in mediocrity.

The Pegula’s have to get it right this time. The Sabres have enough young core players (Eichel, O’Reilly, Reinhart, Kane, Okposo Risto, Guhle, etc.) that if surrounded with a few solid new additions can start winning now.

The Pegula’s can start by taking a long look in the mirror.  Since taking over the Sabres this organization has felt like a zoo; from not getting rid of Darcy Regier on day one to the gross mishandling of Pat LaFontaine to Ted Nolan and a blatant two-year tank job.  Pegula needs to take his share (maybe more than his share) of accountability. Both the Sabres and Bills are soiled in dysfunction.  Maybe Sean McDermott will get the Bills fortunes turned around.  Pegula needs to find a hockey guy to do the same. I was confident the Murray/Blsyma combo would work.  Clearly I, and many others were wrong.

Personally, I think this is a Pegula knee-jerk reaction.

On a personal level I enjoyed Murray as the General Manager. As someone who’s done some work in the media and mostly just a fan, it’s been refreshing to hear a guy get on the podium regularly and not give reporters and fans a bunch of coach-speak. Murray said what was on his mind and if he didn’t directly call others out, he at least strongly hinted towards it.  I’ll miss him for that reason alone.