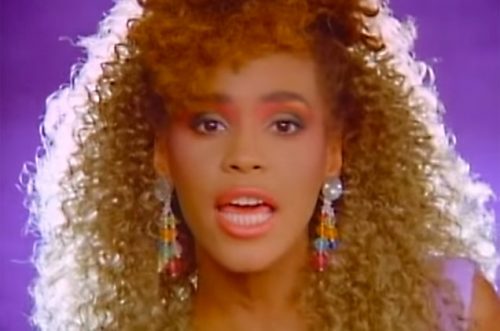 Drop the gloves and fight forever, if you must over who was the most dominant female singer of the 80s.  What’s not debatable is the two lionesses you’d be sparring over are Madonna and Whitney Houston.

Madonna made her mark with fast tempo songs before transitioning into some slower ballads, such as Crazy For You (No. 47 on this countdown).  Whitney was pretty much the opposite. She arrived on the scene in the mid-80s with incredible slow jams— such as Greatest Love of All, You Give Good Love, All at Once and Saving All My Love For You.  Sure, How Will I know was sort of an upbeat song—but it wasn’t until Whitney released I Wanna Dance With Somebody that she truly authenticated herself as a conqueror of all styles.

After a slew of Houston songs that while I enjoyed, were dramatic and often made me want to cry my teenage eyes out, it was energizing to hear from her a tune so fun and catchy.

It enjoyed big-time success both commercially and critically, including winning the Grammy for Best Female Pop Vocal Performance.

It’s easy to see why. The verses are an assortment of range, bounce and exactitude, but it’s the chorus that is all-time sing-a-long worthy—I’m talking top ten of any era.  Don’t believe me? Go to any jukebox in America, queue this up and see what happens next.

Great Lyrics: As tempted as I was to use “Huh, yeah, woo, hey yeah, huh Ooh yeah, uh huh, yeah” before the actual lyrics start, I’ll stick with this instead.

“I’ve been in love and lost my senses
Spinning through the town
Sooner or later, the fever ends
And I wind up feeling down
I need a man who’ll take a chance
On a love that burns hot enough to last
So when the night falls
My lonely heart calls”

Fun Facts: The song was co-written by George Merrill and Shannon Rubicam.  While it was and remains an epic dance jam that seemingly speaks of just dancing and having fun, the lyrics actually have deeper meaning. Rubicam said in an interview “”Many of our friends were in this boat – 5 o’clock comes around, they start getting restless and it’s, ‘What am I gonna do?’ and ‘I can’t stand to be alone again tonight,’ and ‘I really don’t wanna just go party, I’d really like to find somebody, try and find somebody to love.’ So it’s more of that long-term partnership that people want.”