The fact I’m slapping this up a day following my Sonny Red’s review demonstrates these wing escapades aren’t necessarily in chronological order. I know that as fact because the sole reason I’m writing about the Night Cappe to begin with is because nearby Sonny Red’s was closed on a Monday as we (as in my family) attempted to go there first.

Here’s the situation. Not long after returning to Buffalo for my summer workcation (not a typo—my term for being in Buffalo on vacation while technically still working) we made a beeline for Sonny Red’s on a Monday.  That’s because, as described in my previous Sonny post I heard insanely good critiques of their wings from friends.  Those endorsements plus being in Florida and (quality) Buffalo wing-less for the past seven months had me excited, so you can imagine the letdown I felt when learning at their front door that Sonny Red’s isn’t open on Mondays.  Starving and disinclined to put real thought into a wings backup plan, we quickly settled on Night Cappe for no other reason than it literally being the next place over.

Maybe it was fate.

In the interest in full disclosure, I wasn’t sure if Night Cappe even offered chicken wings and resigned myself to the possibility of a burger. I’d been there several times before but my presence involved intoxication approximately one hundred percent of the time.  Seeing I was with my wife, son, in-laws and sister-in-law history wasn’t destined to repeat itself.  We sat at a table and ordered various food—well they did because there was never a doubt I was trying their wings.

I was expecting next-to-nothing from this place because word of mouth is big in my book and frankly I’d never heard a person mention their wings.  Also, it was ominously empty when we showed up, not usually a prelude to a chicken wing hot spot.  I ordered my typical medium, saucy, not so crispy (yeah, I know) wings with as many flats as possible and prepared myself for the taste of mediocrity, something I’ve become well accustomed to with wings in Florida over these past two years.

Low and behold, I couldn’t have been more wrong. I loved everything about these chicken wings.  They weren’t huge but not tiny either. They were smothered in medium sauce precisely as I asked (you’d be shocked how many times that doesn’t happen even when specifically asking that way) and they weren’t obnoxiously crispy. Most importantly, I was more than satisfied with the taste of the sauce.  While I’m confident it was just  standard Frank’s hot sauce and butter I say what the f**k ever—the ratio of each was mixed near-perfect.

I enjoyed the shit outta these wings.  Now It’s conceivable I feel this way at least in part because my expectations were so low and frankly, I was so hungry I probably would’ve devoured their offering even if they were monkey-piss flavored wings. 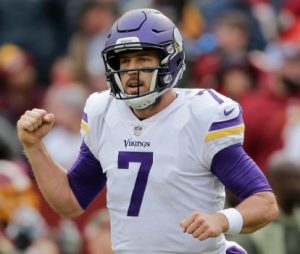 That said, I’m not going to hold the bar accountable or penalize them for me being extraordinarily hungry for chicken wings made in Western New York.  I thought they were very good and I’d definitely recommend Night Cappe. You’re probably going there intent on getting your drank on and banging out rock tunes on the jukebox—rock on baby, but those wings will compliment that buzz deliciously well.

QB Comparison: To use my standard quarterbacking comparison, Night Cappe is the 2017 Case Keenum of chicken wings.  They’re not elite and probably not the tier directly below either, but a lot better than I thought possible and feel pretty damn comfortable with him running my offense.

The Cinderella run may not last with many more places to try, but they’ve earned a Top 10 spot on my Chicken Wings Power Rankings for now