Goodbar is part of the legendary Elmwood strip on the west side that has served legions of drinkers for several decades.  As a Buffalonian I don’t call it a stretch to call it part of the fabric of the city of Buffalo.  But—– how were the wings when I tried them? Read on to find out.

PROS:  Excellent reputation will always keep people coming in.  The 8 x 10 Rick Moranis photo centered perfectly on the men’s bathroom door may be the greatest thing I’ve ever seen.  Also, any bar with a patio on Elmwood Avenue for people watching is a big plus. I also have sentimental pride in this being less than five blocks from where I grew up and drank at countless times, perhaps many of em’ underaged back in the day. 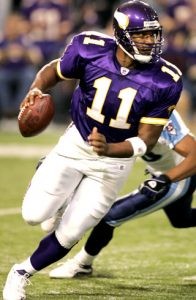 CONS: Not going to beat around the bush here— just don’t think the wings were good to be perfectly honest. I went with the traditional medium/hot and considering the expectations I was dissatisfied nearly across the board.  I’m not into fancy presentation but looking like you just launched them on the plate isn’t necessary either. The bleu cheese (which to be fair I don’t use anyway) was buried underneath the wings and smothered with sauce over it. The medium sauce was borderline watery on the plate.  Last and not least, the bar wasn’t busy yet still waited a solid 40 minutes to get the order. It was quite clear at least on this Saturday afternoon that wings weren’t a priority to them.

QB COMPARISON: Daunte Culpepper.  A big name with all the talent in the world but his career was plagued largely by inconsistency.

OUTLOOK: I’d bet if I want back tomorrow my experience would be better, but I can’t dismiss the disappointment with this visit.  I got off a flight from Florida, picked up my bags, got into a car and made this my very first stop. Based on this visit I now regret the decision.  You can’t be an upper tier spot for wings and be that inconsistent, and truthfully I’m being generous labeling them inconsistent because if this is the only time I ever have them I’d quite frankly say they kinda sucked.  Having said that I won’t bury Goodbar. It’s been and remains a treasure for Buffalo State College students as well as Elmwood strip goers of all kinds. You can feel the aroma of good times and hookups when inside.  But this isn’t a bar review it’s all about the wings and based on my first trip for wings there I don’t foresee a second one, especially when the competition directly next door was better.