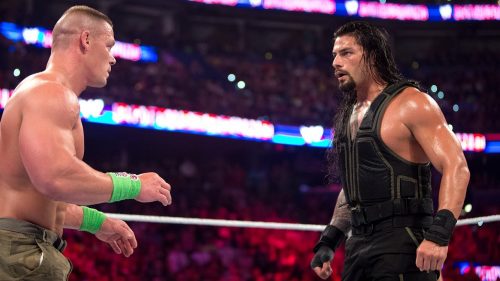 The hosting arena for a WWE show marketing a promotional poster for an upcoming event is one thing.  The Nationwide Arena in Columbus, Ohio doubled down, also releasing a promotional video advertising the upcoming Smackdown Live pay per view, Fastlane on March 11.

If said poster and video are to be true, it’s telling about who may be winning the Royal Rumble later this month.

First let’s discuss the video, which promotes current WWE heavyweight champion A.J. Styles defending in a fatal five way against Shinsuke Nakamura, Randy Orton, Kevin Owens and Sami Zayn.  If this happens it signifies none of the four challengers winning the Royal Rumble, as it makes zero sense to have one win, get a shot at the title in a fatal five way in the last PPV before Wrestlemania 34 before going one on one with the champ in New Orleans on April 8.  That’s stupid even by WWE’s sometimes strange booking standards.

Furthermore it’s no secret on the Raw side we’re headed towards Brock Lesnar defending the Universal title against Roman Reigns on wrestling’s grandest stage. Assuming that’s true and let’s be real here—that’s hardly an assumption, it scratches any Raw superstar off winning the Rumble as it would mean a Wrestlemania date with Brock other than Reigns.

No one that is, except for “free agent “John Cena.

In fact, I think it may be the most likely outcome right now.  I know Vince McMahon holds even the slightest bit of hope fans will pull for Reigns over Brock the former can’t win the Rumble.  Fans will positively take a huge shit on Reigns if he wins the Rumble, far worse than when he won in 2015.  Having said that, this is Vince McMahon we’re talking about.  He knows what you want, even if you don’t know you want it—or something like that.

Cena winning would make sense and I don’t think fans would hate the outcome. It could start a build towards him breaking Ric Flair’s record of 16 world title wins and to do it against A.J. Styles, or maybe his old rival Randy Orton at Wrestlemania 34 would be most memorable.

That’s what I’m thinking anyway. I had high hopes but Nakamura winning so he could go on to face Style as Wrestlemania (maybe he still will in a non-main event), but the Nationwide Arena promo poster cemented the deal for me. Of course, any card is always “subject to change” but nah—- either Cena or Reigns will be the last man standing at the 2018 Royal Rumble.