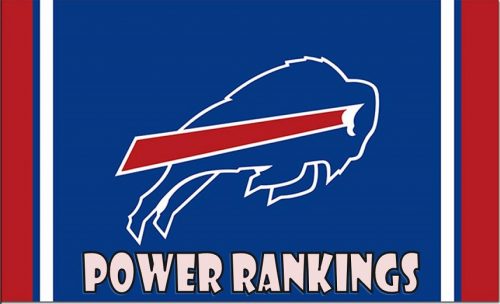 Here’s my rankings after Week three, a 26-16 victory over Denver (last week’s rankings in parenthesis):

1. Jordan Poyer:  The safety had a quiet afternoon against Denver after two Troy Polamalu-like performances to start the season, but no one’s been spectacular enough to unseat his reigning top spot.  Poyer leads all defensive backs in tackles (18) with two sacks, an interception, five passes defended and one near decapitation of Kelvin Benjamin.  Along with all the DBs, Poyer will be tested in a huge way this Sunday in Atlanta against Matt Ryan and his explosive Falcons offense. (1)

2. Ramon Humber: I’ve admitted on several occasions this summer to glancing over the Bills roster and wondering what the hell Sean McDermott’s thinking with Humber a starter on the depth chart.  Time and time again Humber has proven me to be an idiot. He leads the team with 29 tackles and’s one of the guys that stand out when watching All-22 game film. He always seems to be in the right position to make a play—so technically sound.  This kid is far better than I expected on a defense that’s been far better than expected. (3)

3. Kyle Williams:  He’s everything all Bills fans wished Marcell Dareus would be.  The 34-year old continues to rack up impressive efforts, adding a sack against the Broncos and anchoring an interior without Dareus.   With Adolphus Washington and Cedric Thornton serving as depth it’s critical for Williams to stay relatively healthy and play at the level he is now. (5)

4. Lesean McCoy: The team’s most talented player is having the worst season of his career early-on rushing, averaging just 2.9 yards per carry through three games, including only 21 yards on 14 carries Sunday. The blame clearly lies primarily on an offensive line that makes it appear McCoy’s trying to run through a cement wall. Still, if this trend continues you can’t help but start to wonder if McCoy has lost a step.  To his credit Shady’s been invaluable in the passing game; catching a team-high seven passes Sunday and leading the Bills by a wide-margin with 18 grabs through three games. (2)

5. Tyrod Taylor: If you concluded Taylor had the best game of his career against Denver I’d have a hard time making a compelling case against it. If it wasn’t his best it was certainly amongst a tiny handful.  Taylor completed 20-of-26 passes for 213 yards and a touchdown without an interception. He made smart throws and most impressively for me showed more poise in the pocket than normal.  His hanging in the pocket to the last split second to find an opening Jordan Matthews for 31 yards in the third quarter was picturesque.  His despondent performance in Carolina is the only thing keeping Taylor from being ranked significantly higher. (10)

6. Tre’Davious White:  Let’s call it like it is—-White was maybe the worst player in a Buffalo uniform during the first half Sunday and then arguably their best in the second half.  After Emanuel Sanders had his way with White for 30 minutes the rookie turned it around coming out of the locker room. He was all over the field making plays after halftime, blanketing receivers in coverage and earning his first interception. I absolutely love the kid’s mental capacity to shake off a dreadful half and come back so effectively. He’ll eventually become a household name around the league. I’m a big fan. (9)

7. Lorenzo Alexander: If anyone thought Alexander’s breakout in 2017 was a fluke, the 34-year old is silencing remaining critics.  Alexander had a sack Sunday, has picked up two in three games and narrowly missed a few others because he sometimes forgets to wrap.  He continues to prove he’s far more than just smoke and mirrors. (8)

8. Richie Incognito:  Pro Football Focus continues to give this guy sky-high grades.  I’m no connoisseur of offensive linemen but re-watching games shows Incognito as the unit’s most consistent performer.  I can’t rank him higher with how pathetic the Bills rushing attack have been lately, but Incognito’s the least of the team’s ground-and-pound issues. (6)

9. Charles Clay:  He had six catches for 39 yards and a touchdown against the Broncos.  His yards per catch is uneventful to say the least (8.8) but his 13 catches and two touchdowns through three games is promising.  He’s becoming the reliable safety valve that can occasionally stretch the field Buffalo hoped for when giving him a mega deal a few years ago. (Not Ranked)

10. Stephen Hauschka:  Kicked four field goals Sunday, including two from beyond 50 yards and another from 49. That’s money right there as he played a prominent in Buffalo’s victory.  Overall he’s five of six on field goals and perfect on five extra point attempts. Dan Carpenter he is not. (Not Ranked)