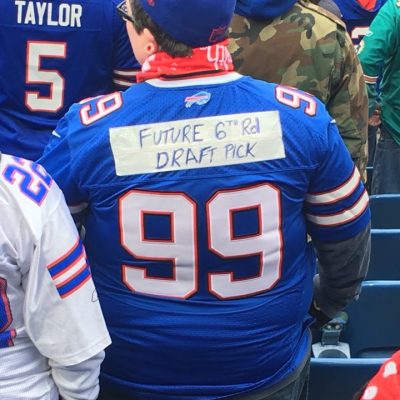 I was guardedly optimistic about the Buffalo Bills, even after getting their asses handed to them in prime time last Thursday against the New York Jets.  Reluctantly I attributed much of that to being tired and on the road with a short week of rest. Well, the lopsided Jets loss was Bills/Giants Super Bowl XXV level drama compared to the wonky nonsense we witnessed Sunday.

The New Orleans Saints toyed with the Buffalo Bills, who weren’t very effective at defending their dirt Sunday.  The 47-10 annihilation of the Bills was every bit as lopsided as the final score indicated, and maybe even more.

If you were among the masses accusing those skeptical of the Bills 5-2 start of being overly downbeat following the Jets debacle 10 days ago, you were either entirely too confident or stricken with severe tunnel vision. The Jets game was just a bad night.  Today was getting taken the woodshed and being punished by a team that was flat-out better in every aspect there is.

Here’s some random thoughts. If I forget anything it’s because I can’t get the vision of multiple Mike Tolbert check downs on third and long out of my head…

♦ Mark Ingram ran for 131 yards and three touchdowns. Alvin Kamara ran for 106 yards and a touchdown.  Fortunately for the Bills Duece McAllister retired eight years ago or he probably would’ve gone for 100 too.  In total New Orleans ran for 298 yards and six touchdowns. At one point the Saints ran the ball 24 consecutive times.  Twenty four! You gotta be’ kidding me.

♦  Marcell Dareus was trash for the Bills this season, when he was even on the field before getting traded. At the time I lauded the trade, praising the Bills for getting at least something (a sixth-round pick) for him while more importantly shedding his contract. But here’s the thing—maybe it wasn’t such a great trade after all, at least not now. The middle of the Bills defensive line has been as bad these past two weeks as I can ever remember. I’m starting to think that even though he literally made no impact plays this year Dareus at least attracted attention and respect, opening up other guys to make plays.  Whether that’s accurate or not is certainly debatable but one thing isn’t — Cedric Thornton, Adolphus Washington and Jerel Worthy are absolutely horrible.  You can drive a car through the holes these guys give up.  People are out for blood with Tyrod Taylor and I get it but I’ll tell you what— for my money the defensive interior is offseason priority number one, especially with this almost certainly being Kyle Williams’ last year.   This is not a NFL caliber defensive tackle rotation and much like the Jets, New Orleans absolutely exposed it.  They won’t be the last either.  Melvin Gordon may run for 400 yards next week.  Maybe the Bills should’ve waited until the offseason to try and move Dareus before cutting him. Even at his worse he’s better than anything else here not named Kyle.

♦ The Bills run defense woes go far beyond overmatched tackles.  Preston Brown is a poor man’s Paul Posluszny at middle linebacker—racks up tackles but never makes an impact stop. Brown has 70 tackles in nine games this year. Of those, how many have mattered?  His partner, Lorenzo Alexander may have just had the sorriest nine tackle game in NFL history today. Ramon Humber did cause a turnover, the one good Bills play of the day but did nothing else.  The linebackers are a mess and specifically I’m over Alexander and ready to see Matt Milano start.

♦ The pass rush and overall defensive end play is no better and possibly even worse. Jerry Hughes hasn’t had a sack in four games and I often found myself double-checking to make sure he was even on the field today.  Even worse is Shaq Lawson, who is officially flirting with the “bust” label.  Sorry, but two sacks and being called a decent run stopper isn’t enough production for a first-round pick.  Thanks, Whaley.  Also, what happened to Eddie Yarbrough? The Bills preseason darling hasn’t done a thing in weeks and got blocked straight through North Tonawanda on Drew Brees’ touchdown scramble.  Ryan Davis? Um, sure. This unit has been bad.

♦ It almost doesn’t seem possible that not long ago we were calling this defense “elite” and praising Sean McDermott as the next Buddy Ryan.

♦ It’s blatantly obvious that turnovers covered up a lot of the Bills deficiencies early in the season. However, don’t let that stop WGR’s Jeremy White from shining the blame away from the defense. Why would you when it’s always so much easier and makes for better radio to simply bash the quarterback almost exclusively.

Don’t let the stories be about the defense. Offense killed the Bills today.

Even though I often disagree with his takes, I respect White as an on-air talent at WGR but come on man—this is Skip Bayless level absurdity. The defense just gave up 298 yards rushing today and 492 yards over the past two games. The Saints set a franchise record with six rushing touchdowns, but let’s beat the Tyrod Taylor dead horse because it makes for more active discussion on the air and social media.  Sure the offense has been brutal the past two games but the defense has been even worse. It IS the big story when you’re supposed to be a team sporting a championship caliber defense.

♦ I’ve tried hard to support Taylor this season and until the past two weeks it wasn’t particularly hard. But it’s indefensible to play as bad as this. His stat line (9-for-18, 56 yards, INT) looks preseason’ish but it’s not the numbers that have many ready to move on from him.  He played like a coward against the Saints, constantly settling for check downs and flat-out missing receivers that if not wide open were at least positioned to potentially make a play. It was a gutless, spineless effort that reminded me far too much of the Trent Edwards era. Taylor was like a boxer that refused to throw anything other than a weak jab. Spare me the Nathan Peterman rhetoric, but come offseason anything is on the table for the Bills at quarterback. I’ve held out hope but am now fully convinced it’s end of the road for Taylor when this season ends.

♦ Dear God, please make Rick Dennison’s tenure in Buffalo one-and-done. If you watched the game no further explanation is needed. He does nothing to help Taylor and this offense.

♦ I’m glad the Bills brought in Kelvin Benjamin so he could get three targets on the first drive and then not another until they’re down 37 points.

♦ At the top of my list of guys I don’t want to see on the 2018 Buffalo Bills that doesn’t include Dennison lies Tolbert. It’s ridiculous how ineffectual he is.  With Lesean McCoy seemingly coming out of the game anything he scampers for more than five yards, it’s sad the Bills didn’t retain Mike Gillislee or at least find someone of competent to man a position that’s important in Buffalo.

#Nudified here’s your streaking fan @buffalobills @SCTopTenPIays does that go in the sack category? pic.twitter.com/zEqDd28j60

SUMMARY: Today signified the end of the wool being pulled over our eyes. Start slashing expectations if you haven’t already.  At 5-2 many, myself included were guilty of thinking this team was more than they are. They’re not. They’re on the way up and the future is bright, but their time isn’t now and that climb is going to take longer than we thought roughly 12 days ago. Real contenders don’t get blown out at home and dominated in this fashion after playing so poorly 10 days ago. Drop down expectations and afternoons like this won’t feel so bad.

The Bills play at the Los Angeles Chargers, at Kansas City and the New England Patriots over the next three weeks. They’ll be lucky to be 6-6 going into the last quarter of the season. To be fair, if they are at .500 they have two winnable games against Miami and a home date with Indianapolis. Having all three gets them to 9 wins, even with another loss at New England.

Next week’s road game in Los Angeles is essentially a playoff game.