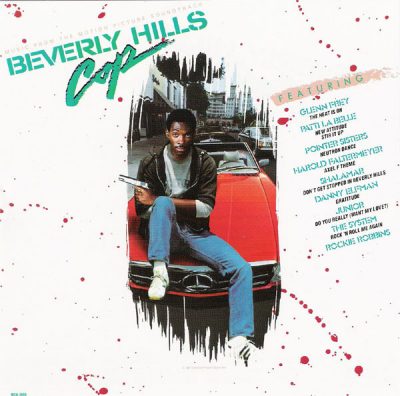 WHY I LOVED IT:  I hold albums in high regard for a variety of reasons.  Sometimes it’s because the album does astoundingly well in sales.  Other times the tracks are so good I don’t give a shit how it did on the charts.  In the case of the Beverly Hills Soundtrack, we’re definitely talking the former.  I recall this soundtrack not being well received critically in the 80s.  I’ll agree with skeptics that grumble this soundtrack has aged horribly, but this isn’t a countdown about how I feel about albums that were released 32 years ago.  Truth is I utterly enjoyed this album and won’t ask for forgiveness for being a mainstream music lover either. I’m not sure I can accurately name eight lyrics from “Neutron Dance’” by The Pointer Sisters excluding the chorus yet it’s easily one my favorite dance jams to get down like a complete idiot to.  Glenn Fry’s “The Heat Is On” is admittedly a bit feathery but still a pretty cool tune.  “Axel F” is a, unforgettable instrumental to most, though in my mind for some unexplainable reason I always immediately get it confused with Herbie Hancock’s “Rockit.”  Patti Labelle’s “New Attitude” is more than just tolerable.  Again, I confess this album is exceedingly cheesy and totally commercially driven, but sometimes I’m perfectly willing to be fine with that, and that’s the case here. This album, much like the movie was entertaining, so stop being a hater.

COMMERCIAL SUCCESS:  This soundtrack was a smashing success commercially, knocking Prince and the Revolution’s “Around the World in a Day” from the top of the Billboard album charts and staying at the top for two weeks before Phil Collins’ “No Jacket Required” took over. “The Heat Is On” went all the way to number-two on the Billboard Hot 100 while “Axel F” climbed to and “Neutron Dance” peaked at six. For those keeping score that’s three top six hits.  For good measure “New Attitude” reached 17.  This was one of the more successful selling movie soundtracks of the 80s.

FUN FACT:  Courtesy of Songfacts.com: “In an interview with Tavis Smiley, Frey talked about how he ended up recording this song: “The Eagles are broke up and it’s in the middle ’80s, and Irving Azoff, my manager, calls me up and said, ‘Glenn, you got to come to a screening. We’re going to show this movie, this Eddie Murphy movie. It’s going to be huge. You’ve got to get a song in it. Come on.’ So I went to the screening and I’m sitting there, and Don was there and Irving was there, and we’re waiting for the movie to start, and I look over my shoulder – Quincy Jones. Okay. I look over my shoulder – Stevie Wonder. Look back over here, it’s the Pointer Sisters. I’m sitting there going, ‘I’m dead. There’s no way I’m getting a song in Beverly Hills Cop.’

So we watched the movie with temp music and it was fabulous and we laughed, and everybody said, ‘This movie is going to be huge.’ But I never thought I’d get a song in it. So a month or two goes by and then all of a sudden somebody says, ‘Hey, we’re going to send you a song. See if you maybe want to sing it. It’s written by these guys, Keith Forsey and Harold Faltermeyer, the guys in Munich that do the Donna Summer records are going to send you something. See if you want to sing it. So they sent me a demo of ‘The Heat is On.’ It sounded kind of like a Huey Lewis thing, the saxophone in it. Kind of sounded like something I might do. So I said, ‘Okay, I’ll do it.’ So I met the guys, I came in, I sang it one day, I played guitar and did background vocals the next day and I got a small check, I think 15 grand. I had a little Christmas money, and I was happy.”