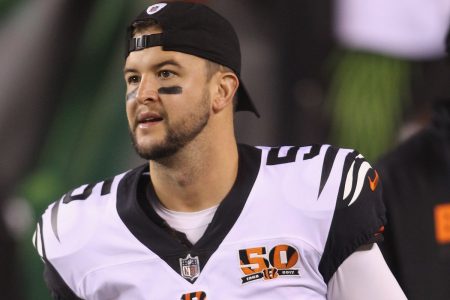 One day into free agency and we officially know the Buffalo Bills aren’t fuckin’ around.  The team had already traded Tyrod Taylor to the Cleveland Browns for the first pick of the third round (65th pick overall) in the upcoming NFL Draft on April 26th.

The move left the team with only one incumbent quarterback on the roster, Nate Peterman.  While everyone and their mother knows the Bills are all-in for taking a quarterback high in the draft next month, it was always likely they were going to add a free agent to the mix who at the very least would push Peterman for a backup role if not a temporary starting job.

Brandon Beane answered the bell Wednesday by inking Cincinnati Bengals quarterback A.J. McCarron to a two-year deal worth around a reported $10 million.

Essentially Buffalo switched from Tyrod to A.J., are saving more than $7 million on the 2018 salary cap by doing so—and picked up the early third round pick.

Hell to the yeah, Brandon.

I love this fuckin’ move for many reasons.  Firstly, I love it purely from a football standpoint. I think McCarron is a pretty damn good quarterback and perfectly fits what the Bills need right now.  If they draft a guy early in the first round, and make no mistake about it—they are still one trillion percent taking a quarterback early, McCarron can be a “bridge” quarterback capable of starting early on or even all of this season depending on how ready said rookie is to play.  At the worst he’s an upgrade over Nate Peterman and a solid backup to Darnold, Rosen, Allen, Mayfield or whatever rookie they name.  I’m not just talking on the field either. By all accounts he’s a great locker room guy and will help a youngster in the film room and in meetings. 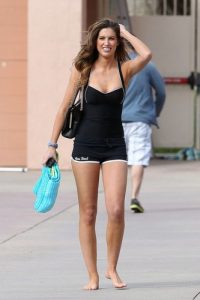 Plus, McCarron comes to Buffalo knowing his role.  Simply put, man—it’s just a better fuckin’ than Tyrod.  I liked Tyrod and I’m grateful for what he’s done for this franchise considering he was pretty much shit on the majority of his three years here, but McCarron is the right guy for this role.

Plus, for the Bills to save considerable cap money AND pick up a very valuable draft pick on the process—complete no brainer.

If you’re hating this move right now, there’s a very good chance you’re a complete idiot and there’s no hope for you.

Oh, and his wife is hot. Look out Rachel Bush AKA Mrs. Jordan Poyer, you officially have competition for team’s hottest wife.